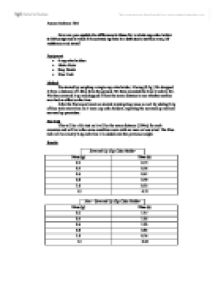 How can you explain the difference in times for a whole cup cake holder to fall compared to when it is screwed up into in a ball due to surface area, air resistance and mass?

How can you explain the difference in times for a whole cup cake holder to fall compared to when it is screwed up into in a ball due to surface area, air resistance and mass? Equipment * 6 cup cake holders * Metre Ruler * Stop Watch * Blue Tack Method We started by weighing a single cup cake holder, it being (0.2g.) We dropped it from a distance of 1.84m from the ground. We then recorded the time it took to fall. We then screwed it up and dropped it from the same distance to see whether surface area had an effect on the time. After the first experiment we started investigating mass as well by adding 0.2g of blue tack every time on 5 more cup cake holders, repeating the screwed up and non screwed up procedure. ...read more.

The greater the surface area of the object, the greater air resistance, this is because the more surface there is, the greater the number of particles that the falling cupcake holder is likely to collide with resulting in increased friction. That is why the screwed up cup cake holder tended to fall a little faster. The faster that the cup cake holder was falling increased not only the frequency of impact but the force of impact which resulted in greater friction forces acting between the holder and the air. We added on extra 0.2g of blue tack each time and it seems to have made a difference even though it shouldn't have. ...read more.

Since every time the holders had more mass and weighed more and experienced a greater downward force of gravity, it would have to have accelerated for a longer period of time before their was enough upward air resistance to balance the large downward force of gravity. That's why mass played a large part on the speed of the cup cake holders. Evaluation I tried to make my experiment as accurate as I could by measuring everything correctly and making sure there was the same amount of blue tack each time and that the distance remained the same. I could have improved this better by trying to find a way to make sure my hand that dropped the cup cake wasn't pushing an extra force downwards. I made my best effort to make my evidence good enough for my conclusion and I think I have reached that target. Annem Rehman 10D ...read more.