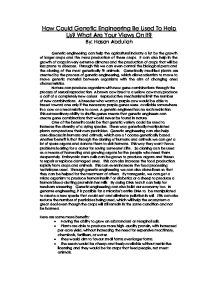 How Could Genetic Engineering Be Used To Help Us? What Are Your Views On It?

How Could Genetic Engineering Be Used To Help Us? What Are Your Views On It? By: Hasan Abdullah Genetic engineering can help the agricultural industry a lot by the growth of larger crops and the mass production of these crops. It can also help in the growth of crops in very extreme climates and the production of crops that will be less prone to diseases. Through this we can even control the biological pests and the cloning of the most genetically fit animals. Genetically modified plants are created by the process of genetic engineering, which allows scientists to move to move genetic material between organisms with the aim of changing ones characteristics. Nature can produce organisms with new gene combinations through the process of sexual reproduction. A brown cow bred to a yellow cow may produce a calf of a completely new colour. Reproductive mechanisms limit the number of new combinations. A breeder who wants a purple cow would be able to breed toward one only if the necessary purple genes were available somewhere in a cow or a near relative to cows. ...read more.

This can also reduce the number of pesticides being used, which will help the ecosystem a great deal even though the crops will still remain in the same condition and not be harmed. Here are some more benefits: * Having the ability to grow on substandard or marginal soils. * Plants are able to produce more high-quality protein, with increased per-acre yield, without increasing the need for expensive machinery, chemicals, fertilisers, or water. * They would aim to favour small farms over larger farms. * The seeds would be cheap and freely available without restrictive licensing and they would be for crops that feed people, not meat animals. No more Genetic Diseases Genetic engineering enables scientists to produce clones of cells or organisms that contain the same genes. 1. Scientists use restriction enzymes to isolate a segment of deoxyribonucleic acid (DNA) that contains a gene of interest-for example, the gene regulating insulin production. 2. A plasmid extracted from a bacterium and treated with the same restriction enzyme can hybridize with this fragment's "sticky" ends of complementary DNA. ...read more.

But genetic engineering must not be misused and must stay within the limits. So basically it shouldn't go towards cloning as it is playing with God. But I think that it is fine to clone animals for helping humans by using their organs to help the sick. I agree with that because God said that if you save someone's life it is just like saving the life of whole mankind. So I basically allow the cloning of animals and plants as they don't cause any great harm. I disagree with the genetic engineering of cloning because it questions about the individuality and identity of the cloned person. One of the reasons I strongly oppose cloning is that experiments with humans will undoubtedly result in malformed clones, as it has happened before the successful cloning of Dolly the sheep. It took 277 times to get a perfect sheep and so it would take much more than that for a human and so will result in many malformed humans. I agree with the idea of genetic engineering as long as it is used sensibly and not in cloning. But cloning is fine to be done on plants and animals but not humans. ...read more.