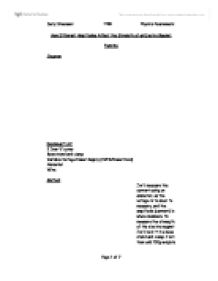 How Different Amplitudes Affect the Strength of an Electro Magnet.

How Different Amplitudes Affect the Strength of an Electro Magnet

I will measure the current using an ammeter, as the voltage is to small to measure, and the amplitude (current) is whole numbers. To measure the strength of the electro magnet I will hold it in a boss stand and clamp. I will then add 100g weights until the iron core the magnet is not strong enough and breaks its link with the core. I will have eight coils on the magnet, as any more and it would be to strong. I will repeat do the experiment at 0.0, 0.2, 0.4, 0.6, 0.8, 1.0 amps. I will then repeat it 3 times and take an average of my results and plot them on a graph.

In my experiment, I could vary several things such as: the amplitude (current), the voltage, the amount of coils on the magnet, the size of the core or the type of wire used. To make it a fair test I will use the same equipment, keep everything the same, apart from the varying factor.

My results were as I expected them to be, once I had repeated the anomalous ones. I think my results are good enough to make a firm conclusion.

I could have used smaller mass weights instead of 100g weights, this would have given me more accurate results as I could have found how many I would hold to the nearest gram, this would also make the results differ more as there would be less grams so it might hold a slightly different amount each time .The only problem is that the school did not have 1 gram weights and it would have taken a lot longer to get the results.

I would also retake 0.2 and maybe 0.1 with 1 gram weights to see how much they would hold, as they would not hold 100 grams, this would also make my graph more accurate.