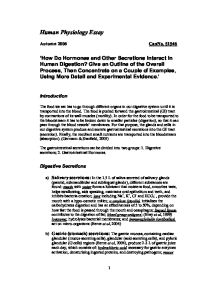 How Do Hormones and Other Secretions interact in Human Digestion?

Human Physiology Essay Autumn 2006 CanNo. 51546 'How Do Hormones and Other Secretions interact in Human Digestion? Give an Outline of the Overall Process, Then Concentrate on a Couple of Examples, Using More Detail and Experimental Evidence.' Introduction The food we eat has to go through different organs in our digestive system until it is transported into the blood. The food is pushed forward the gastrointestinal (GI) tract by contractions of its wall muscles (motility). In order for the food to be transported to the bloodstream it has to be broken down to smaller particles (digestion), so that it can pass through the blood vessels' membranes. For that purpose, the glands and cells in our digestive system produce and secrete gastrointestinal secretions into the GI tract (secretion). Finally, the resultant small nutrients are transported into the bloodstream (absorption). (Germann & Stanfield, 2005) The gastrointestinal secretions can be divided into two groups: 1. Digestive secretions; 2. Gastrointestinal Hormones. Digestive Secretions a) Salivary secretions: In the 1.5 L of saliva secreted of salivary glands (parotid, submandibular and sublingual glands), different substances are found: mucin with water forms a lubricant that moistens food, smoothes taste, helps swallowing, aids speaking, maintains oral epithelium and teeth, and inhibits bacteria creation; ions including Na+, K+, Cl- and HCO3- , provide the mouth with a hypo-osmotic milieu; ? ...read more.

The secretion of the gastrin is stimulated by: 1.Digestion products in the stomach, such as coffee; 2.Nervous activity during the gastric cephalic phase (vagus nerve involved); 3.Stomach distal region distension. Gastrin release is inhibited by the gastric contents' PH being dropped to 2.5 (Brook & Marshall, 2001), also by secretin, GIP and somatostatin hormones. (Bray et al, 1999) Gastrin stimulates the secretion of HCl, pepsins and intrinsic factor. Also, ''it enhances gastric motility and increases the tone of the lower oesophageal sphincter''. (Bray et al, 1999) Furthermore, it causes the pancreatic secretions to increase and contracts the gallbladder, while increasing the mucosa of the stomach, duodenum and colon. (Bray et al, 1999) Conclusion The digestive secretions, throughout the GI tract, are released for the purpose of the food digestion and subsequently its absorption into the bloodstream. In order for the gastrointestinal system to be efficient, its secretions have to be controlled and regulated step by step. The factors involved in digestive regulation are: 1.for salivary glands: medullary salivary centre producing autonomic input, 2.for stomach secretions: neurons and hormones controlling cephalic-phase, gastric-phase, and intestinal-phase stimuli, 3.for pancreatic secretions: nervous reflexes and hormones such as secretin and CCK (Potentiation happens when both are present), 4.for liver (bile) secretion: hormones (CCK and secretin). These hormones also cause the contraction of the gallbladder. ...read more.