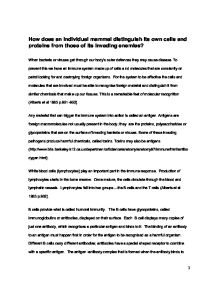 How does an individual mammal distinguish its own cells and proteins from those of its invading enemies?

How does an individual mammal distinguish its own cells and proteins from those of its invading enemies? When bacteria or viruses get through our body's outer defences they may cause disease. To prevent this we have an immune system made up of cells and molecules that are constantly on patrol looking for and destroying foreign organisms. For the system to be effective the cells and molecules that are involved must be able to recognise foreign material and distinguish it from similar chemicals that make up our tissues. This is a remarkable feat of molecular recognition (Alberts et al 1983 p.951-952). Any material that can trigger the immune system into action is called an antigen. ...read more.

The binding of an antibody to an antigen must happen first in order for the antigen to be recognised as a harmful organism. Different B cells carry different antibodies; antibodies have a special shaped receptor to combine with a specific antigen. The antigen-antibody complex that is formed when the antibody binds to the antigen makes the antigen harmless. B cells that remain in the lymphatic tissue are called memory B cells. "The memory B cells do not secrete antibodies but if they are later exposed to the antigen that triggered their formation, they become B cells that secrete antibodies. The memory B cells ensure immunity. If antigens are molecules in the surface membranes of invading cells, when antibodies combine with them, the resulting complexes may agglutinate the enemy cells by clumping them together. ...read more.

T cells provide several activities collectively called cellular immunity, especially important in the body's fight against viruses and in helping B cells make antibodies. T cells have protein receptors on their surface membrane. These recognise and bind to specific antigens, but only when the antigen is stuck on the surface of the body's cells. Once they have bound to the antigen the T cells divide quickly and repeatedly to form an activated clone (Alberts et al 1983 p.958-959). Because of mammal's immune system, we are able to fight off most harmful organisms through the antigen-antibody complex. Antibodies work by binding to the antigen, therefore making it inactive. They also bind to antigens so the invading cells clump together to form insoluble immune complexes that are easily digested by phagocyte cells circulating in the blood and lymph. ...read more.