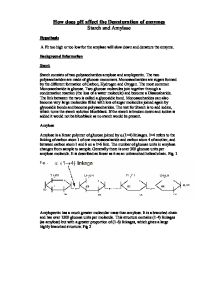 How does pH affect the Denaturation of enzymes Starch and Amylase.

How does pH affect the Denaturation of enzymes Starch and Amylase Hypothesis A Ph too high or too low for the amylase will slow down and denature the enzyme. Background Information Starch Starch consists of two polysaccharides amylose and amylopectin. The two polysaccharides are made of glucose monomers. Monosaccharides are sugars formed by the different formation of Carbon, Hydrogen and Oxygen. The most common Monosaccharide is glucose. Two glucose molecules join together through a condensation reaction (the loss of a water molecule) and become a Disaccaharide. The link between the two is called a glycosidic bond. Monosaccharides can also become very large molecules filled with lots of sugar molecules joined again by glycosidic bonds and become polysaccharides. The test for Starch is to add iodine, which turns the starch solution blue/black. If the starch is broken down and iodine is added it would not be blue/black as no starch would be present. Amylose Amylose is a linear polymer of glucose joined by ? (1>4) linkages. 1>4 refers to the linking of carbon atom 1 of one monosaccaharide and carbon atom 4 of another, and between carbon atom 1 and 6 on a 1>6 link. The number of glucose units in amylose changes from sample to sample. Generally there is over 300 glucose units per amylose molecule. It is described as linear as it as an unbranched helical chain. Fig. 1 Amylopectin has a much greater molecular mass than amylose. It is a branched chain and has over 1300 glucose units per molecule. This structure contains (1-4) linkages (as amylose) but with a greater proportion of (1-6) linkages, which gives a large highly branched structure. Fig 2 Amylase Amylase exists in many forms and plants and humans make use of it. There are two kinds of amylase enzymes. Alpha-amylase is found in saliva and is called ptyalin. The other kind is called pancreatic amylase and is secreted in pancreatic juice, into the small intestine or ileum. ...read more.

This was to be pH levels 2, 4, 6.4, 7, 9 and 12. Then in the rack I added the corresponding pH level to what I wrote on each boiling tube. To check the pH was what I was told it would be, I took a strip of pH paper and tested the bottle that each pH buffer came out from. Each pH level was as it was said to be and I carried on with my experiment. I then placed the boiling tube I was going to time in the water bath at 40?C, and added everything else to the boiling tube while it was placed inside the water bath. I then carried the next stage of my experiment one step at a time. I used a syringe to correctly get 5ml of 1% starch volume from its container into one boiling tube at a time. I then placed 1 drop of iodine solution into the first level of pH in the boiling tubes. The solution turned blue/black in colour, showing that starch was present in the solution. I placed a rubber bung over the top of the boiling tube and gently shook the solution together. I then removed the bung and got 5ml of 1% alpha-amylase ready to be added to the mixture by a syringe. As I squirted the amylase carefully into the boiling tube, I simultaneously started my stopwatch. I timed how long it took for the solution to become colourless. I knew when to stop the stopwatch as I compared it next to the measure I had done previously before the experiment. When it did match the colourless solution, it showed that all the starch had been converted to maltose and the reaction was complete. I recorded my results in my pre-drawn table. I then did the same for the remaining results. As I started on pH 2, I then went in turn up to pH 12. ...read more.

Also to prove that my hypothesis worked even greater would be to use a wider range of pH levels. I would test above pH 9, at pH 10,11, 13 and 14. I would only be able to test this if I found a buffer that did not react with iodine, like pH 12 did. I would add these changes if this investigation was to be carried out by me again, providing the resources were available. Further research could be done on how pH affects other enzymes besides alpha amylase. Because my experiment was on enzymes, this leaves room for further investigation to be implemented. Other variable like temperature, enzyme concentration, substrate concentration, the affect of competitive and non-competitive inhibitors are all possibilities on the affect of enzymes. Concluding my investigating, my results support my hypothesis. At a pH level either too high or too low level would denature the enzyme. This was received at pH 2. The pH has an affect on enzymes as the three-dimensional shape that enzymes molecular structure is based on, is partly the result of hydrogen bonding. PH, which is a measure of hydrogen ion concentration, will affect the enzyme by changing the concentration of hydrogen in that enzyme. Any change in pH can effectively denature enzymes. My anomalous results were identified and a justification for the reason behind it was explained. I see my results to be reliable due to the matching results of the repeated experiment. I explained the limitations to my experiment, and suggested improvements and alterations. This included the use of a pH buffer, and repeating the experiment further. Suggestions for further extended research were also given. Bibiography Student express. Properties on enzymes [online] http://www.studentxpress.ie/educ/biology/bio4.html Worthington biochemical organisation. The effect of pH on enzyme activity [online] http://www.worthington-biochem.com/introBiochem/effectspH.html Brooklyn university. The effect of pH on enzyme activity [online] http://academic.brooklyn.cuny.edu/biology/bio4fv/page/ph_and_.htm Crocodile clips revision. Information on Catalysts [online] http://www.crocodile-clips.com/absorb/AC4/sample/LR1505.html Glenn & Susan Toole (1999) Biology for advanced level - fourth edition. Stanley Thornes ...read more.