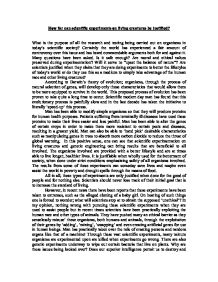 How far can scientific experiments on living creatures be justified?

How far can scientific experiments on living creatures be justified? What is the purpose of all the research and testing being carried out on organisms in today's scientific society? Certainly the world has experienced a fair amount of controversy over this issue and has heard commendable arguments both for and against it. Many questions have been asked. Is it safe enough? Are moral and ethical values preserved during experimentation? Will it serve to "upset the balance of nature"? Are scientists justified when they claim that they are doing experiments to better the lifestyles of today's world or do they use this as a medium to simply take advantage of the human race and other living creatures? According to Darwin's theory of evolution; organisms, through the process of natural selection of genes, will develop only those characteristics that would allow them to be more equipped to survive in the world. ...read more.

In this positive sense, one can see that scientific experimentation on living creatures and genetic engineering can bring results that are beneficial to all involved. The organisms involved are provided with a better lifestyle and are at times able to live longer, healthier lives. It is justifiable when wholly used for the betterment of society, when done under strict conditions emphasizing safety of all organisms involved. The results from some of these experiments can someday save lives and maybe even assist the world in poverty and drought spells through the means of food. All in all, these types of experiments are only justified when done for the good of people and for nothing else. Scientists should never lose track of their initial goal that is to increase the standard of living. ...read more.

Through these vast scientific experiments, many minute organisms are experimented upon are killed when experiments go wrong. There are also genetic experiments underway to wipe out certain bacteria that live on plants. Why are these issues being looked over? Does our superior intelligence permit us to destroy and kill any organism at random? Opposers feel that these experiments are being carried to far and cannot be justified when it comes to these issues. In conclusion, we discover that one fine purpose of scientific experimentation is that it enables us to solve many predominant genetic diseases. However, do these things make up for the gradual abuse of living creatures? If genetic engineering and scientific experiments are allowed to continue will this exploitation continue as well or will governments come together in bid to return the biotechnology world to a state of normality rather than frenzy? ...read more.