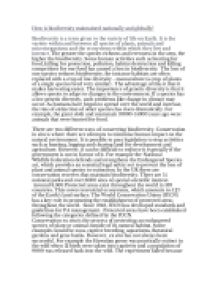 How is biodiversity maintained nationally and globally?

﻿How is biodiversity maintained nationally and globally? Biodiversity is a term given to the variety of life on Earth. It is the variety within and between all species of plants, animals and microorganisms and the ecosystems within which they live and interact. The greater the species richness and evenness in the area, the higher the biodiversity. Some human activities such as hunting for food, killing for protection, pollution, habitat destruction and killing competitors for our food has caused a loss in biodiversity. The loss of one species reduces biodiversity, for instance habitats are often replaced with a crop of low diversity - monoculture (a crop of plants of a single species bred very similar) . The advantage of this it that it makes harvesting easier. The importance of genetic diversity is that it allows species to adapt to changes in the environment. If a species has a low genetic diversity, such problems like change in climate may occur. ...read more.

However, ex situ has not always been successful. For example the Hawaiian goose was practically extinct in the wild when 12 birds were taken into captivity and a population of 9000 was released back into the wild. The experiment failed because the original cause, rats, had not been eliminated. The rats eat the eggs and the nestlings of the geese. The Botanical garden are used to grow and display plants primarily for scientific and educational purposes. They also include herbarium, lecture rooms, laboratories, libraries, museum and experimental or research plantings. There are over 2,000 botanic gardens, holding 80,000 plant species in their living collections. Seed banks contain seeds that can remain viable for decade and they are not only stored, but are used to provide a wide range of benefits for the community such as food and building materials for habitat reclamation and repopulation. Modern techniques are used to preserve large amounts of genetic material by freezing sperm or eggs. ...read more.