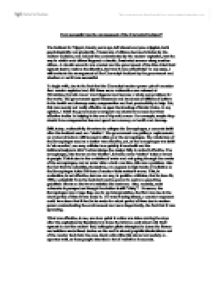 How successful was the management of the Chernobyl Incident?

How successful was the management of the Chernobyl Incident? The incident in Pripyat, twenty years ago, left almost everyone crippled, both psychologically and physically. Thousands of citizens became infected by the nuclear accident, and not just the contaminated by the nuclear explosion, but the way in which each citizen lingered a chaotic, frustrated manner along another citizen. A chaotic scenario was created and the government of the time tried their upmost best to restore the situation, but was it done effectively? In my essay, I will evaluate the management of the Chernobyl incident by the government and whether or not it was successful. To begin with, due to the fact that the Chernobyl nuclear power plant's number four reactor exploded and 400 times more radioactive was released at Hiroshima, thyroid cancer was triggered and became a whole new problem for the world. The government spent thousands and hundreds of billions of dollars in the health and cleanup costs, compensation and lost productivity to help. ...read more.

However, the Sarcophagus was a huge flop, and in my interpretation, the flaw was due to the short period of time it was made in. If I wasn't being biased, a counter argument could have been that it had to be made in a short period of time due to nuclear power contaminating the environment and more importantly, the fact that it was spreading. What was effective, to me, was how quick k action was taken during the days after the explosions by liquidators to tame the inferno; coal miners did their upmost to cool the nuclear fool, helicopter pilots attempted to douse the flames and soldiers made timed dashes on the roof to shovel graphite blocks blown out of the reactor back into the cone. Such action like this shows how society co-operates well, as these people absorbed a lot of radiation in seconds. Another criticism I am making that there were no psychologicsl treatments and mental treatments after the incident. ...read more.

My view wouldn't do the government at the time justice though, as there was chaos to be more "organised" and "satisfactory" in designing the sarcophagus, and maybe there wasn't even a design! The management was effective in a way because workers were so intact and quickly acted upon the situation days after the explosion and how the government evacuated the citizens. This was, however, a major flaw as Ukrainian had environment that was contaminated. Also, the government failed to acknowledge psychological harm to citizens and the fright and failed to act upon it. Yet the whole thing was a success in a way due to the fact that workers could sacrifice there lives in being infected with radioactivity, to save the Pripyat society. My view is neutral due to the fact that an article is merely biased and therefore the points such as the "better surveillance could of explained cancer increases" can be leading and biased; such things like this we cannot use to make evaluative comments on as we weren't there. ?? ?? ?? ?? ...read more.