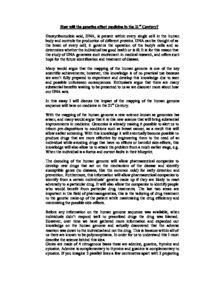 How will the genetics affect medicine in the 21st Century?

How will the genetics affect medicine in the 21st Century? Deoxyribonucleic acid, DNA, is present within every single cell in the human body and controls the production of different proteins. DNA can be thought of as the brain of every cell, it governs the operation of the body's cells and so determines whether the individual has good health or is ill. It is for this reason that the study of DNA generates such excitement in medical research, and offers such hope for the future identification and treatment of disease. Many would argue that the mapping of the human genome is one of the key scientific achievements; however, this knowledge is of no practical use because we aren't fully prepared to experiment and develop this knowledge due to seen and possible unforeseen consequences. Enthusiasts argue that there are many substantial benefits waiting to be presented to us as we discover more about how our DNA acts. In this essay I will discuss the impact of the mapping of the human genome sequence will have on medicine in the 21st Century. With the mapping of the human genome a new science known as genomics has arisen, and many would argue that it is this new science that will bring substantial improvements in medicine. ...read more.

If you imagine 2 parallel lines a few centimetres apart with 3 projecting squares off the top line facing the bottom line. Going from left to right, the first box containing adenine, the second guanine and the third cytosine. Now imagine another 3 squares projecting off the bottom line with thymine in the first square, cytosine in the second and guanine in the third, from left to right. Each one of the squares is complementary to the opposite square, so adenine with thymine, guanine with cytosine and cytosine with guanine. This is called complementary base pairing, now if one of these nitrogenous bases is deleted or misplaced this will alter which nitrogenous base is placed on the opposite side. So if in my example adenine was misplaced and cytosine was put in its' place, this would alter the base that is placed opposite and would change from thymine to guanine to complement the cytosine. These are polymorphisms; there are many polymorphisms in every single gene of every single cell of every person on this planet and depending on how much the polymorphism has affected the gene, e.g. If only one nitrogenous base has been misplaced compared to a complete row. ...read more.

I do not fully believe in the possibility of a mutant life form, purely because this is an idea that people have taken on through films. However, I wouldn't say it is impossible because scientists have cloned a sheep and with the decoding of the human genome sequence almost completed, other than ethical issues I can't see why it can't be done to a human and maybe in the future genes that will give the human super human strength and intelligence could be inserted into the humans' DNA. This could be done a large scale to create a superior race that would have all the desired traits of other humans such as good looks, intelligence and high efficiency. Isn't this already being done? Babies are born a pre-determined sex, with pre- determined eye/skin/hair colour. The last time attempts were made at creating the superior race; it resulted in millions of Jews being executed by the Nazis. Finally, for now I believe we should aim to create a better world, where disease such as small pox isn't rampant in third world countries. We should use this information and knowledge carefully and aim to eliminate terminal illnesses such as AIDs and cancers so that we don't watch relatives and friends die helplessly. ...read more.