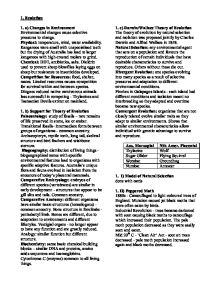 The sides are deoxyribose sugar and phosphate. The rungs have complementary nitrogen bases: adenine and thymine, guanine and cytosine. Nucleotide: sugar, phosphate and a base. 3. d) Chromosomes During Meiosis Meiosis occurs during the production of sex cells, producing cells with half the normal chromosome number, haploid (n) instead of diploid (2n). Before meiosis chromosomes in the nucleus make copies called chromatids, linked by a centromere. Genes are located on chromosomes so they are copied when chromosomes are copied and separate during second division of meiosis. First Stage: homologous chromosomes line up. Crossing over occurs - two chromosomes swap chromatid parts (recombinants). Genes located on same chromosome are linked - inherited together but crossing over breaks links meaning some genes change position during meiosis. Second Stage: chromatids separate and four cells are formed with haploid number of chromosomes - gametes. 3. e) Variability of Offspring Sexual reproduction leads to greater variability because it combines genetic information. - Crossing over during meiosis produces new combinations of genes - Chromosomes move randomly into one of the four gametes created during meiosis resulting in random segregation of genes - Sex cells come together randomly at fertilisation 3. f) Sex Linkage and Codominance Co-dominance: both alleles of homozygous parents are expressed in phenotype of heterozygous offspring in unblended form. Roan cattle show mixture of red and white hairs of homozygous parents. Human blood. Sex Linkage: sex is genetically determined. Female - two X chromosomes. Male - X and Y. Sex linked genes are located on the sex chromosome, usually X. Sex-linked traits are usually recessive and more common in males. Colour-blind person has recessive allele of no pigment. Y carries no allele for trait, so a single recessive on X is effective in males. Recessive alleles on both X chromosomes are needed for trait to show in females. 3. g) Morgan and Sex Linkage Thomas Morgan studied inheritance of characteristics in fruit flies. ...read more.

Manipulating DNA: - Restricting enzymes by cutting DNA at specific locations - Ligases strengthen bonds between newly reformed DNA - Multiple copies of the recombinant DNA are created using polymerase chain reaction Methods: - Microinjection: DNA is inserted into a cell from another species using a glass needle - Biolistics: gene gun fires small metal particles coated with DNA into another cell nucleus - Electroporation: cells are exposed to short electrical impulses so small pores form in the membrane so genes can be inserted Reasons: - increasing crop yield - resistance to pests and diseases - ability to survive in extreme conditions - producing drugs and vaccines - better quality produce - new products - tissue and organ donation 5. c) Impact on Genetic Diversity Reproductive technologies reduce natural variation by producing identical organisms. Crops: more consistent growth rates and harvesting times but if change in environment occurs then whole lot could be wiped out. Transgenic species: initially increases genetic diversity because a gene from a species is placed in another, making that gene pool larger. - Bt cotton: if used exclusively then natural cotton may become extinct and having a monoculture means it is more susceptible to environmental changes and can lead to Bt resistance in insects. - Salmon: genetically modified to grow bigger than normal. If fish become released into the wild then the wild females would mate with the larger males and the transgene would spread rapidly in the natural population. 5. I) Cloning Tissue culture propagation - tissue from roots is taken and root cells separated. Cells are grown in nutrient-rich medium where they become unspecialised. After treatment with plant hormones, calluses develop into seedlings that grow into mature plants genetically identical to the original 'parent' plant. Wollemi Pine. Nuclear transfer is a methodology used in cloning. An egg cells is evacuated and the nucleus from another cell is taken out and inserted into this egg cell. When the egg cells is allowed to develop, it will be a genetically identical clone. 5. II) Transgenic Species Transgenic species genetic material originating from another organism. See 5. c ...read more.