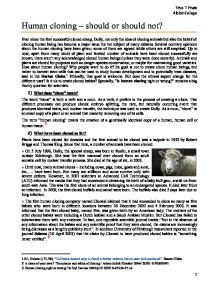 Human cloning - should or should not? Ever since the first successful cloned sheep, Dolly, not only the idea of cloning animals but also the belief of cloning human being has become a major issue the hot subject of many debates. Several contrary opinions about the human cloning have been given; some of them are agreed while others are still sceptical. Up to now, apart from many kinds of plant and limited number of animals have been cloned successfully are known, there aren't any acknowledged cloned human beings (unless they were done secretly). Animals and plants are cloned for purposes such as danger-species conservation, or maybe for maintaining good varieties. How about human cloning? Why people want to do it? Its goal is not to create clone human beings, but rather to harvest stem cells that can be used to study human development and to potentially treat diseases, said in the Boston Globe.1 Ethically, that goal is welcome. But does the ethical aspect change for the different uses? Is it ok to create cloned babies? Specially, "Is human cloning right or wrong?" remains a big thorny question for scientists. 1) ...read more.

4 In therapeutic cloning, parts of the body could be cloned. Its stem cells would be then extracted and encouraged to grown into a piece of human tissues or a complete human organ for transplant. The end result would not be a human being; it would be a replacement organ, or piece of nerve tissue, of quantity of skin. The patient would not have to wait until an unrelated donor dies to obtain a transplant. A new organ could be grown for them as needed. This means that organs such as livers and kidneys can be cloned to be given to a patient in need of a transplant without being body-injection as it contains their own DNA. In the near future, it is hoped that the process can be used success fully to replace, for example, the damaged, diseased cells of patients suffering from Alzheimer's, Parkinson's or diabetes. In fact, it is necessary for scientists to create the embryo initially. Once the nucleus or needed cells are removed, the embryo is destroyed. Does this not represent the killing of human life? The desire of overcoming degenerative diseases like those mentioned above is welcome but must it be at that cost? Perhaps for this reason, therapeutic cloning isn't allowed in many countries. ...read more.

Thus, we have to concern about the disadvantages of reproductive cloning. There is also "the risk of losing genetic diversity as a result of using cloning, especially in the agricultural industry, scientific development, reproductive cloning was "heavily challenged in the scientific community when it first emerged, especially after scandals in which scientists claimed to have cloned animals but actually hadn't". Governments are nervous about reproductive human cloning and many have acted to ban it. Many scientists urge extreme caution and some are still sceptical.8 Ethically, reproductive cloning approaches many inspiring issues. Some people are doubtful about the idea of being able to clone copies of living organisms, and question about the risks of using cloned animal in the food supply. Some believe that life begins at conception; they think reproductive cloning is unnatural and it could oppose their religious views. Psychologists and other people who study development are interested by "the potential to use reproductive cloning as a test of the famous nature versus nurture debate". 9 Like the others, I'm also sceptical about this type of cloning as almost the cloned died very young. Even if I couldn't have children, I wouldn't prefer using this neither. Nowadays, many women have been succeeded with IVF treatment, and their children grew healthily as well. For that reason, I think I'd rather use IVF treatment if I couldn't have babies. ...read more.