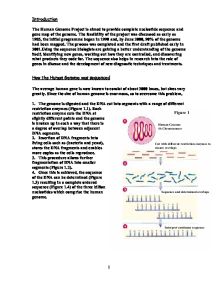 Introduction The Human Genome Project is aimed to provide complete nucleotide sequence and gene map of the genome. The feasibility of the project was discussed as early as 1985, the initial programme began in 1990 and, by June 2000, 90% of the genome had been mapped. The process was completed and the first draft published early in 2001.Using the sequence biologists are gaining a better understanding of the genome itself, identifying new genes, working out how they are controlled, and discovering what products they code for. The sequence also helps in research into the role of genes in disease and the development of new diagnostic techniques and treatments. How the Human Genome was sequenced The average human gene is now known to consist of about 3000 bases, but sizes vary greatly. Since the size of human genome is enormous, so to overcome this problem, 1. The genome is digested and the DNA cut into segments with a range of different restriction enzymes (Figure 1.1). Each restriction enzyme cuts the DNA at slightly different points and the genome is broken up in such a way that there is a degree of overlap between adjacent DNA segments. 2. Insertion of DNA fragments into living cells such as (bacteria and yeast), stores the DNA fragments and enables more copies as the cells reproduce. 3. This procedure allows further fragmentation of DNA into smaller segments (Figure 1.2). 4. Once this is achieved, the sequence of the DNA can be determined (Figure 1.3) ...read more.

Other treatments will involve the development of drugs guided by the genes and their products. This new field of pharmacogenetics has already yielded a number of drugs used in breast cancer treatment for example. PRENATAL TESTING AND SCREENING FOR FETAL ABNORMALITIES Prenatal testing is the use of special tests carried out during pregnancy. There are two kinds of tests. Diagnostic tests: determine if the baby has, or will develop after birth, a particular problem. It is possible to detect conditions that are due to changes in chromosome number and structure as well as changes to the genetic information in particular genes. Some of the conditions that can be determined during pregnancy would be evident at birth or in the first year of life (birth defects) but others would not affect a person until later in childhood, adolescence or even as an adult. Screening tests: determine if the baby has an increased risk of having a particular problem. They are not diagnostic tests and an increased risk result does not mean the baby will definitely have a problem. There are a number of reasons that would suggest the consideration of prenatal diagnostic testing. These include: * having a family history of a person with a serious condition * both parents are "carriers" of the same faulty gene * where one of the partners in a couple has a serious condition which may be passed on to a baby * having a previous child affected by a serious problem in growth, development and/or health * exposure to some chemical or other environmental agent * where the ...read more.

If no genetic abnormalities are found, what should be the view if the parents want to terminate the pregnancy simply as a way of choosing the sex of the children in their family? Limitations * Definite results may not be possible at all times. * In some cases only an increased risk of the person being affected can be predicted. * The finding of a change in a particular gene may provide little information about the persons disease and may rarely predict the severity of the condition or the age at which symptoms will appear. * There may be lack of clear cut relationship between the genotype (genetic make up) and the phenotype (expression of the condition).The decision to act on this information can be very distressing. Future Developments Use of prenatal diagnostic techniques should only be encouraged if the presence of a genetic disease is certain or almost certain. It is recommended that government authorities should only encourage prenatal diagnosis and therefore support the cost of it if such conditions prevail. Such financial support aims to give equality of access to frequently very costly procedures. In cases where diagnosis is reliable and the disease is frequent and particularly severe, it may be desirable to encourage a general extension of prenatal diagnosis methods. A public health programme for the collection of data on (sickle-cell anaemia and thalassemia) would be feasible as of now in areas where it is frequent, and will soon be a possibility for certain X-linked disorders. Further extension could be considered as soon as possible to the diagnosis of frequent, grave, and intractable genetic diseases (such as cystic fibrosis), taking into account the cost of testing. ...read more.