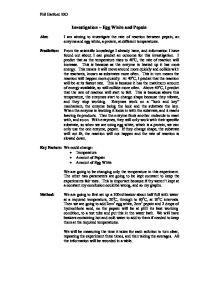 I am aiming to investigate the rate of reaction between pepsin, an enzyme and egg white, a protein, at different temperatures.

Investigation - Egg White and Pepsin Aim: I am aiming to investigate the rate of reaction between pepsin, an enzyme and egg white, a protein, at different temperatures. Prediction: From the scientific knowledge I already have, and information I have found out about, I can predict an outcome for this investigation. I predict that as the temperature rises to 40oC, the rate of reaction will increase. This is because as the enzyme is heated up it has more energy. This means it will move around more quickly and collide with the reactants, known as substrates more often. This in turn means the reaction will happen more quickly. At 40oC, I predict that the reaction will be at its fastest rate. This is because it has the maximum amount of energy available, so will collide more often. Above 40oC, I predict that the rate of reaction will start to fall. This is because above this temperature, the enzymes start to change shape because they vibrate, and they stop working. Enzymes work on a "lock and key" mechanism, the enzyme being the lock and the substrate the key. When the enzyme is working it locks in with the substrate, and it reacts leaving its products. ...read more.

Conclusion: From my results, I can just about draw a good conclusion, that the enzyme reached its optimum temperature at 40oC. However, when doing the experiment at 60oC, the experiment went very quickly, which was out of line with the others. However the rest of the curve seemed to go up, reaching its high point at 40oC, and then starting to come back down. This is because the enzyme works best at 40 oC, because the enzyme was moving about quickly and was able to react with lots of the substrate. Below this, the enzyme didn't have as much energy, so will not react as fast. Above this temperature, the enzymes start to vibrate because of the amount of energy they have, and then starts to change shape. When this happens, the substrate, which is shaped specifically for that particular enzyme can't fit into the enzyme (the "lock and key" hypotheses), so the enzyme will not work. When this happens, it means the enzyme has denatured. In this experiment, the enzyme pepsin broke down the protein, the egg white into amino acids. This was the white precipitate we were left with was the amino acids, which looked more like egg white, than the solution we began with! ...read more.

Measuring when the experiment had actually finished was again difficult. As the precipitate was formed, it started to settle, leaving a clear liquid behind. However, the some of the precipitate floated to the top and it meant we probably took a finishing point at different stages in each experiment. This could have again affected our results. If I was going to repeat the experiment, I would definitely take more time and care over the temperatures of the experiments and before I started I would determine a finishing point which would be the same for each experiment. If I had the time I would do each experiment separately and repeat it a few times. This would mean I would get more accurate results which would probably make a better fit with the expected results. To extend the experiment, I could extend the range of temperatures we took measurements at. If the temperature goes much beyond 60oC, I don't think much would happen, but I could take it down to 0oC, using ice. We could also take measurements at every 5oC, so the resulting curve would be more accurate, and I would be able to draw a firmer conclusion. I could also test out other enzymes with their substrates, say amylase and starch, to see if temperature had the same effect on them. Phil Harford 10O ...read more.