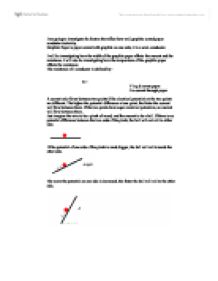 I am going to investigate the factors that affect how well graphite coated paper conducts electricity. Graphite Paper is paper coated with graphite on one side; it is a semi-conductor.

I am going to investigate the factors that affect how well graphite coated paper conducts electricity.

Graphite Paper is paper coated with graphite on one side; it is a semi-conductor.

The resistance of a conductor is defined by: -

V is p.d across paper

I is current through paper

Just imagine the wire to be a plank of wood; and the current to be a ball. If there is no potential difference between the two ends of the plank, the ball will not roll to either side.

If the potential of one side of the plank is made bigger, the ball will roll towards the other side.

The more the potential on one side is increased, the faster the ball will roll to the other side. 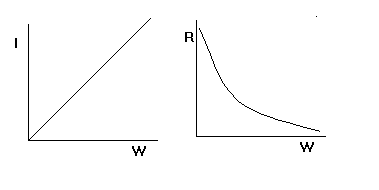 I predict that when I increase the temperature, the resistance will go down. I believe this to be the case because on page 245 of Physics by Hutchings it says that carbon has a negative temperature coefficient of resistance. Graphite is a form of carbon, and should behave in the same way.

Below is what I expect my graph to look like. 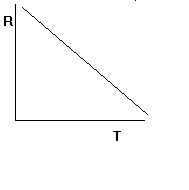 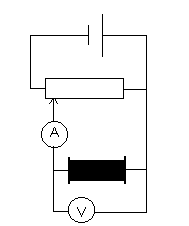 I will use an analogue ammeter as it gives a more accurate reading. 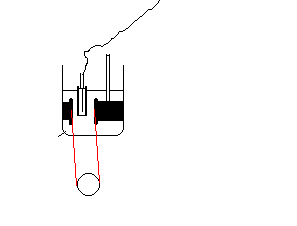 I could also use a narrower range of values for the width of the paper; maybe go down in 0.5cm instead of 1cm.

Nevertheless, my graphs allowed me to draw a decent conclusion from the experiment (see analysis) and see a pattern, and see quantitatively what the pattern did.

I again think that my experiment worked well because my results were consistent with each other. I received no anomalous results, which again must mean that my experiment was a success. However my results were not perfect as the points did not all lie on the same line. This could be because of the condensation, which would have slightly dampened the paper, altering how much current can pass through it. To improve the experiment you could wrap the paper around a light bulb to heat it, and use a variable resister to change the temperature. But it would be difficult to measure the temperature of the paper.

Nevertheless, my graph allowed me to draw a decent conclusion from the experiment (see analysis) and see a pattern, but I could not see quantitatively see what this pattern did.