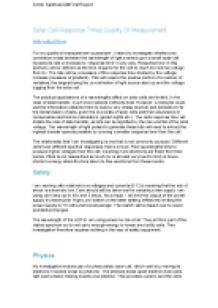 For my quality of measurement coursework, I intend to investigate whether any correlation exists between the wavelength of light exerted upon a small solar cell impacts its rate of increase to ‘response time’ in any way. Response time in this scenario will be defined as the time required for the cell to reach its nominal voltage from 0v. The rate will be a measure of the response time divided by the voltage increase (measure of gradient). This will require the precise control of a number of variables; the largest being the co-ordination of light source start up and the voltage logging from the solar cell.

The practical applications of a wavelengths affect on solar cells are limited. In the case of data transfer, much more tailored methods exist. However, a hobbyist could use the information obtained here to build a very cheap receiver and transceiver for the transmission of data, given the low costs of solar cells and their abundance in consumable electronics (calculators, garden lights etc.). The cells response time will dictate the rate of data transfer, as bits can be signified by the rise and fall of the cells voltage. The wavelength of light pulsed to generate these bits will need to extract the highest transfer speeds possible by coaxing a smaller response time from the cell.

The relationship that I am investigating is one that is not commonly pursued. Different cells have different spectral responses; that is known. Red wavelengths tend to produce higher voltages from the cell; meaning more electrons are freed from their bonds. What is not researched as much (or is at least very hard to find) is how a photon’s energy alters the time taken to free electrons from these bonds. 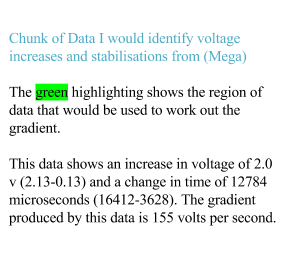 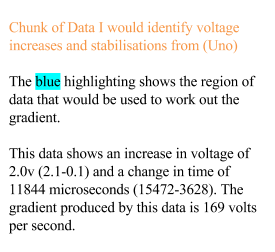 By repeating the above Green LED results with the Mega, the rounding effect demonstrated by the Uno was shown to add up to ±9.4x10-4 seconds (12784-11844 microseconds) to my response time values.

The uncertainty introduced to my gradient was calculated using:

These uncertainties are specific to every data set and, as they have been eliminated by the use of higher resolution equipment, are now irrelevant to the rest of this investigation.

When it finally comes down to plotting the final rates of voltage increase against the LED wavelengths, there will be an uncertainty in the wavelength of the LED. Manufacturing tolerances of these LED’s range from ±5% in terms of wavelength. The brightness of the LED can be calibrated out, but nothing short of purchasing higher tolerance LED’s will rectify the range of wavelengths. This can therefore not be rectified. I will express this uncertainty on my final graph with error bars. The LED uncertainties will be 0.05 multiplied by the stated wavelength, to get ±5%:

The data sheet from the Arduino Mega specs the microcontroller at a 16mhz clock speed. When booted, the bootloader loads the code and this has an overhead that can range wildly (±20 microseconds). As such, the micros() function I am using to represent response time in my code has an uncertainty of ±20 microseconds. The real response time could lie anywhere ±20 microseconds from the stated value. There is nothing I can do to eliminate this uncertainty, so it will have to be expressed in the form of error bars in my graphs. 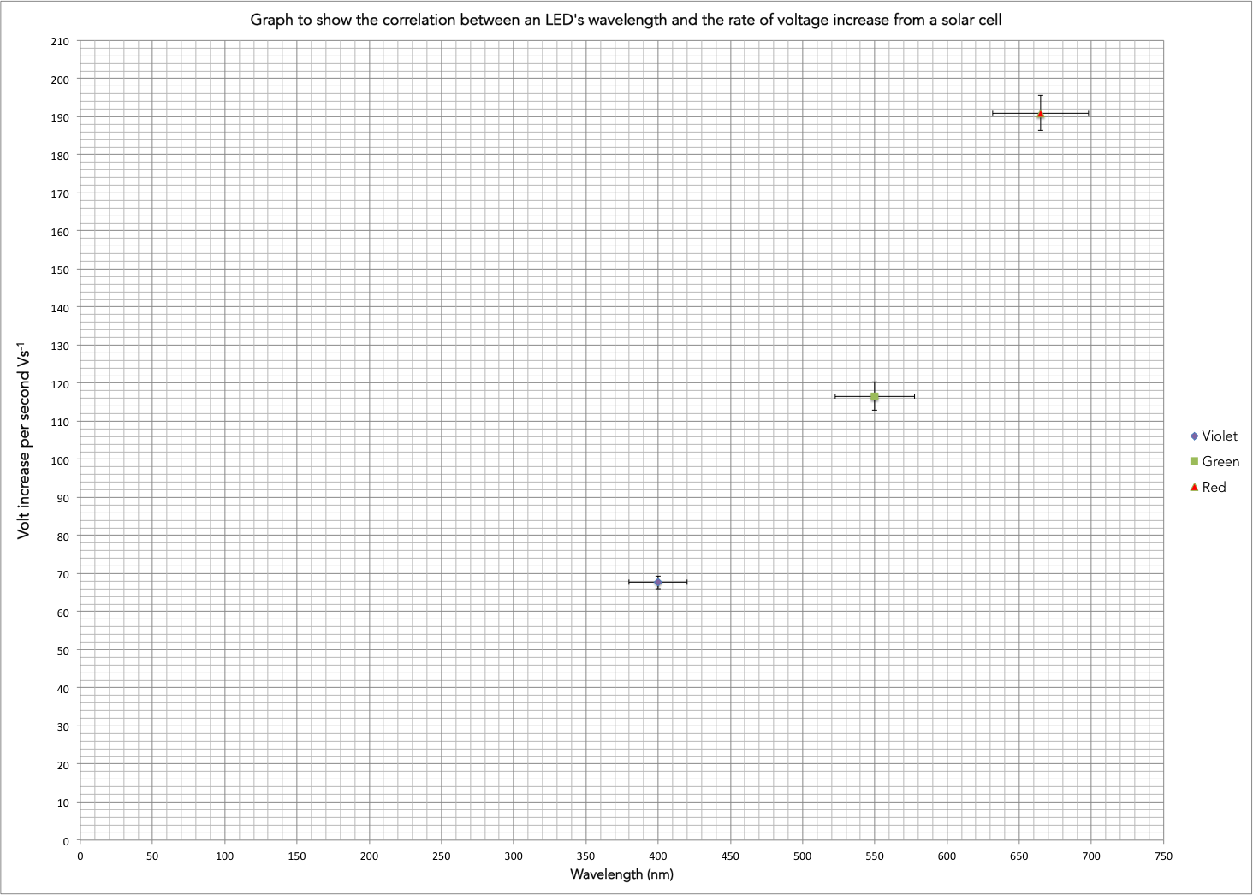 Use of dedicated circuitry

Rather than relying on a microcontroller that plays host to a bootloader and other background I/O, I would develop dedicated circuitry to trigger exactly on time and produce higher resolution data at smaller intervals. I would incorporate shielding into the design to minimise external influence on the data and use transistors to trigger data logging. The solution would run at a higher clock rate to achieve data at smaller intervals. These would all serve to reduce the random error visible in my gradient results, which can be up to ±2%. Reducing this would help to increase the product moment correlation coefficient of my data, so as to increase the strength of my conclusion.

Use of permanent mounting mechanisms

To reduce any uncertainties introduced by positioning of equipment, I would have a dedicated mounting rig set up that cannot be moved. This would help to maintain the LED at a constant distance, reducing any chance of error. It would also allow the LED to always be focussed directly on the solar panel.

Use of higher tolerance LED’s

The LED’s I purchased were manufactured cheaply in a Chinese factory in bulk. The resulting manufacturing tolerances stated on the LED’s datasheet were ±5-10%. I would make sure to purchase more expensive LED’s which match the datasheet exactly, meaning the wavelength I was given would have no (or very little) uncertainty. This would, again, reduce the uncertainty of my results and put more strength in an already strong conclusion.

Please find attached to this document the appendix disc.