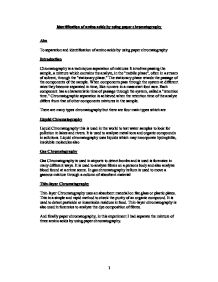 Identification of amino acids by using paper chromatography Aim To separation and identification of amino acids by using paper chromatography Introduction Chromatography is a techniques separation of mixtures It involves passing the sample, a mixture which contains the analyte, in the "mobile phase", often in a stream of solvent, through the "stationary phase." The stationary phase retards the passage of the components of the sample. When components pass through the system at different rates they become separated in time, like runners in a mass-start foot race. Each component has a characteristic time of passage through the system, called a "retention time." Chromatographic separation is achieved when the retention time of the analyte differs from that of other components mixtures in the sample. There are many types chromatography but there are four main types which are Liquid Chromatography Liquid Chromatography this is used in the world to test water samples to look for pollution in lakes and rivers. It is used to analyze metal ions and organic compounds in solutions. Liquid chromatography uses liquids which may incorporate hydrophilic, insoluble molecules also Gas Chromatography Gas Chromatography is used in airports to detect bombs and is used is forensics in many different ways. It is used to analyze fibres on a persons body and also analyze blood found at a crime scene. ...read more.

Hence, known Rf values can be compared to those of unknown substances to aid in their identifications. (Note: Rf values often depend on the temperature, solvent, and type of paper used in the experiment; the most effective way to identify a compound is to spot known substances next to unknown substances on the same chromatogram.) In addition, the purity of a sample may be estimated from the chromatogram. An impure sample will often develop as two or more spots. Purity of the sample After the chromatography experiment, if a sample develops as only one spot it may or may not be pure. The sample may contain another compound which did not separate under the conditions of the experiment. Purity of samples is often determined in conjunction with other techniques, such as measuring a sample's melting point or recording its nuclear magnetic resonance spectrum Risk assessment In the experiment I made the solvent mixture with ethanol I must be aware that it is highly flammable and when being handle to keep it away from a naked flame also it is harmful to the skin and eyes so you should wear safety spectacles and gloves, also in the solvent in the mixture there will ammonia I must be aware that It is very toxic and if inhaled it could be fatal this is why the solvent must be made in a ...read more.