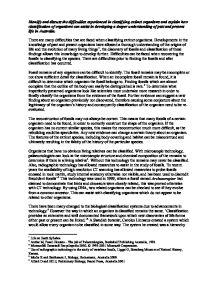 Identify and discuss the difficulties experienced in classifying extinct organisms and explain how classification of organisms can assist in developing a deeper understanding of past and present life in Australia.

Identify and discuss the difficulties experienced in classifying extinct organisms and explain how classification of organisms can assist in developing a deeper understanding of past and present life in Australia. There are many difficulties that are faced when classifying extinct organisms. Developments in the knowledge of past and present organisms have allowed a thorough understanding of the origins of life and the evolution of many living things1, the discovery of fossils and classification of these findings allows this knowledge to develop further. Difficulties can be faced when recovering the fossils to classifying the species. There are difficulties prior to finding the fossils and after classification has occurred. Fossil remains of any organism can be difficult to identify. The fossil remains may be incomplete or not show sufficient detail for classification. When an incomplete fossil remain is found, it is difficult to determine which organism the fossil belongs to. ...read more.

Organisms that have no obvious living relatives can be classified. With microscopic technology, palaeontologists can look at the microscopic structure and chemical composition of the remains to determine if there is a living relative3. Without this technology the remains may never be classified. Also, radiographic technology has allowed researches to assist in the study of fossils. 'In recent years the availability of high-resolution CT scanning has allowed researches to probe fossils encased in rock matrix, study internal anatomy otherwise not visible, and has been used to discredit fraudulent fossils'4 This technology was used in 1999, where a fossil named Archaeoraptor had claimed to demonstrate that birds and dinosaurs were closely related, this was proved otherwise with CT technology. By using DNA, two related organisms can be checked to see if they evolve from a common ancestor. This can assist with classifying organisms which do not appear to be related to other organisms. ...read more.