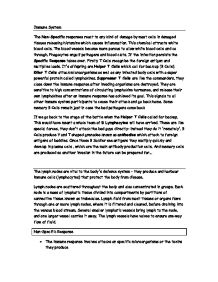 Immune System. The Non-Specific responses react to any kind of damage by mast cells in damaged tissues releasing histamine which causes inflammation.

Immune System The Non-Specific responses react to any kind of damage by mast cells in damaged tissues releasing histamine which causes inflammation. This chemical attracts white blood cells. The blood vessels become more porous to allow white blood cells and co through. Phagocytes engulf pathogens and blood clots. If the infection persists the Specific Response takes over. Firstly T Cells recognise the foreign antigen and multiplies loads. It's offspring are Helper T Cells which call for back up [B Cells]. Killer T Cells attack microorganisms as well as any infected body cells with a super powerful protein called lymphokines. Suppressor T Cells are like the commanders, they close down the immune response after invading organisms are destroyed. They are sensitive to high concentrations of circulating lymphokine hormones, and release their own lymphokines after an immune response has achieved its goal. This signals to all other immune system participants to cease their attack and go back home. Some memory B Cells remain just in case the bad pathogens come back If we go back to the stage of the battle when the Helper T Cells called for backup. ...read more.

Several smaller lymphatic vessels bring lymph to the node, and one larger vessel carries it away. The lymph vessels have valves to ensure one-way flow of fluid. Non-Specific Response * The immune response involves attacks on specific microorganisms or the toxins they produce * Non-Specific responses react to any kind of damage, such as a physical knock, a burn, extreme cold, corrosive chemicals, radiation, microbes, parasites, worms * The main non-specific defensive response is inflammation * Mast Cells in damaged tissue releases histamine which cause an acute inflammation involving pain, redness and swelling * This attracts white blood cells * The walls of capillaries, the smallest blood vessels at the site, become more permeable and porous to allow the passage of white blood cells, defensive chemicals, and fluids, which accumulate as the battle proceeds * The white blood cells surround, engulf, and destroy invading pathogens * The blood may also clot to form a barrier that not only seals the leak but also prevents further microbial penetration Also involves * Phagocytes- Large white blood cells which engulf foreign ...read more.

T Cells attack microorganisms as well as any body cells infected with them, using powerful proteins called lymphokines * Suppressor T Cells inhibit the response of other cells to the invading microbes Some T Cells retain memory of the antigen for future defence Antibody-Mediated Immunity * Whereas T Cells can attack invading organisms directly, B Lymphocytes do so 'remotely' * They produce Y or T shaped chemical antibodies * Each type of antibody acts against a certain type of microorganism or material by attaching to antigens on its surface * The presence of antigens triggers B Cells to multiply * Some develop in plasma cells, which are the main antibody producing cells * Memory cells are produced, which can recognise the same antigen and initiate defence many years later Phagocytosis Engulfing Stage- The white cell extends pseudopods [which are like false feet] towards and around the unwanted item. Lysis Stage- The items are trapped in a phagocytic vesicle, which with enzyme-containing lysosomes form phagolysosomes. Where lysis (breaking down) occurs. Exocytosis stage- Harmless products of cell eating are expelled through the white blood cell's membrane, or in a tiny membrane bound exocytic vesicles to the extracellular fluid. ...read more.