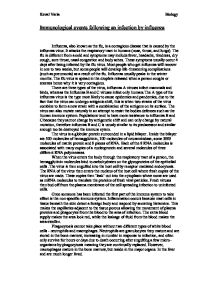 Immunological events following an infection by influenza Influenza, also known as the flu, is a contagious disease that is caused by the influenza virus. It attacks the respiratory tract in humans (nose, throat, and lungs). The flu is different from a cold and symptoms may include fever, headache, tiredness, dry cough, sore throat, nasal congestion and body aches. These symptoms usually occur 4 days after being infected by the flu virus. Most people who get influenza will recover in one to two weeks, but some people will develop life-threatening complications (such as pneumonia) as a result of the flu. Influenza usually peaks in the winter months. The flu virus is spread in the droplets released when a person coughs or sneezes hence why it is very contagious. There are three types of the virus, influenza A viruses infect mammals and birds, whereas the Influenza B and C viruses infect only humans.The A type of the influenza virus is the type most likely to cause epidemics and pandemics, due to the fact that the virus can undergo antigenic shift, this is when two strains of the virus combine to form a new strain with a combination of the antigens on its surface. ...read more.

Neutrophils are granulocytes they mature and are stored in the bone marrow, increasing in number in response to infection, and often only survive for hours or days due to death occurring after engulfing a few micro-organisms by phagocytosis meaning they are continually replaced. However, macrophages mature in the bone marrow, but reside in the major organs. In the liver and are much longer lived. The process of phagocytosis begins with the gathering of neutrophils at the site of infection by chemotaxis. They are attracted by complement proteins, activated by the invading body, as well as chemicals released by the virus and other substances such as histamine. Receptor proteins on the neutrophil cell surface membrane bind to the surface compounds on the influenza virus. This adherence causes the neutrophil membrane to fold in on itself surrounding the virus in what is known as a phagosome. The binding tends to happen after the virus has been labelled by complement proteins or by antibodies (involving macrophages). Lysosomes situated in the neutrophil cytoplasm then bind to the phagosome forming phagolysosomes, releasing highly toxic free radicals, as well as hydrogen peroxide to kill the virus. The cell wall of the virus is digested by lysozyme, while proteases, and nucleases, along with other enzymes digest the remains of the virus. ...read more.

Receptor proteins on the T8 cells recognize proteins on the virus-infected cells. Once a cell is found, the T8 cell inserts a perforin protein into the membrane of the cell creating a hole in effect. Then they inject proteases and nucleases into the cell to kill it by digesting its proteins. Lastly they release interferon, which is a viral reproduction inhibitor. This prevents the virus from spreading any further. The lymphokines released by the T4 lymphocytes also stimulate B-cell activation. B-cells undergo clonal selection until the correct B-cells are found. Once found the B-cells undergo clonal expansion by mitosis. As mitosis produces genetically identical cells when reproduced, each of these B-cells codes for the same proteins and hence the same antibody. The plasma B-cells are the ones that produce antibodies and they produce thousands per second. These antibodies can detect the virus fragments and hence help to stop the infection, usually by either agglutinating the cells for later phagocytosis, or 'sticking' to the cells to immobilize them. After the infection, most plasma B-cells die off but a few memory B-cells remain patrolling the blood. In the future, if the body is infected again with the same virus, the memory B-cells will detect the virus and produce a faster, stronger and longer lasting response meaning that you will probably not even feel the symptoms of the flu before the infection is over. Words: 1297 Keval Varia Biology ...read more.