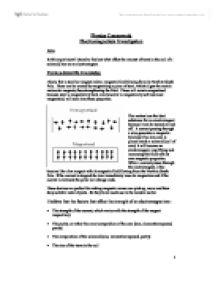 I know that a steel bar magnet emits a magnetic field flowing from its North to South Pole.  These can be created by magnetising a piece of steel, which aligns the metals molecular magnets; thus strengthening the field.  These will remain magnetised because steel is magnetically hard, iron however is magnetically soft and once magnetised, will soon lose those properties. 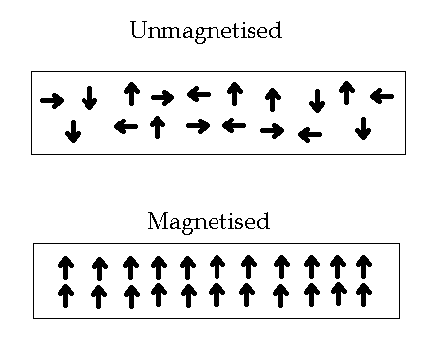 This makes iron the ideal substance for an electromagnet because it can be turned on and off.  A current passing through a wire generates a magnetic field and if an iron core is placed inside a solenoid (coil of wire) it will become an electromagnet, amplifying and increasing this field with its own magnetic properties.  While a current passes through the electromagnet, it has become like a bar magnet with its magnetic field flowing from the North to South Pole.  If the current is stopped the iron immediately loses its magnetism and if the current is reversed the poles will change ends.

These devices are perfect for making magnetic cranes can pick-up, move and then drop suitable metal objects.  So they have much use in the modern world.

There are many obvious safety precautions to be taken:

I carried out a preliminary experiment to test whether my system for the experiment would work.

This experiment used a fairly long piece of thin wire, which was stripped at both ends with a wire stripper.  This became the coil, which was put around an iron nail that was to be the core.  The lab pack that provided the power for the experiment was plugged in at the mains and set to 8 volts.  A series circuit was constructed which contained an ammeter, variable resistor and the electromagnet.

In essence, the smaller and more precise the turns of wire are, the more accurate and precise the molecular magnets will be aligned.  The better aligned they are the closer the magnet comes to becoming a completely magnetised and are thus more powerful.

I would not say that my results are particularly accurate but they are however correct.  This I know because they are definitive and I understand how this happens.  The problem lies in the degree of accuracy, which I believe to be quite poor (despite giving the right result).  If I were to repeat the experiment I would use much smaller objects thus improving the accuracy.

It would have also been enlightening to carry on the experiment to see if there is a point where the magnet cannot become any stronger as it is fully magnetised.  Some people suggested that a negative effect might kick in but this would not happen, the magnet would simply stop getting any stronger because the molecular magnets are fully aligned.

Nevertheless my results are definitive enough and so I am pleased with my findings.