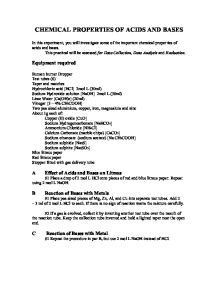 In this experiment, you will investigate some of the important chemical properties of acids and bases.

This gas can be identified by its pungent odor. When sodium sulfite is made to react with hydrogen chloride, sulfur dioxide is released which has a pungent odor. Na2SO3 + HCl ==> NaCl + H2O + SO2 When ethanoates are made to react with acids, they release methane and carbon dioxide gas. When sodium ethanoate is made to react with hydrochloric acid, a these gases are released. CH3COONa + HCl ==> NaCl + CH4 + CO2 Part F: Acids react with bases to form salt and water. These reactions are called neutralization reactions. When litmus paper is added to the strong acid initially, the blue litmus paper turns red. However, when sodium hydroxide is added, the litmus paper turns back to blue. This is because the sodium hydroxide neutralizes the acid and increases the pH of the solution. HCl + NaOH ==> NaCl + H2O Part G: When cations of weak bases are made to react with strong bases, the more reactive ions displace the less reactive ones to release a gas. In this reaction, the sodium ions displace the ammonium ions and methane gas is released which has a pungent odor. NaOH + NH4Cl ==> NaCl + H2O + NH3 Conclusion: In this lab, we tested and observed the various chemical properties of acids and bases. We also learnt the ways in which gases release can be tested. The lab helps us understand the chemical properties of acids and bases clearly through practical application. ...read more.