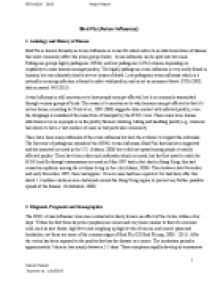 ﻿EPScie120 2013 Major Report Bird Flu (Avian Influenza) 1. Aetiology and History of Disease Bird Flu or known formally as Avian Influenza or Avian flu which refers to an infectious strain of disease that most commonly affect the avian group (birds). Avian influenza can be split into two main Pathogenic groups highly pathogenic (HPAI) and low pathogenic (LPAI) strains, depending on capability to cause disease amongst poultry. The highly pathogenic avian influenza is very rarely found in humans, but can ultimately lead to severe causes of death. Low pathogenic avian influenza which is a naturally occurring infection is found to infect wild poultry, and is not an imminent threat. (FOA.ORG, date accessed 14/5/2013). Avian Influenza is still uncertain as to how people may get affected, but it is commonly transmitted through various groups of birds. The reason it?s uncertain as to why humans may get affected is that it?s not air-borne, according to (Virol et al., 2007-2008) suggests close contact with infected poultry, even the droppings is considered the main form of transport by the H5N1 virus. These cases were human infections occur in is people is in the poultry farmers working, killing and handling poultry e.g. chickens has shown to have a vast number of cases in that particular community. ...read more.

The Avian Flu after having entering the human body attacks the cells especially the respiratory cells, they usually implant themselves in other host cells and reproduce and divide destroying the host cell and using the copies to spread to other cells meaning that it spreads very fast in the human body(FOA.ORG, date accessed 15/5/2013). The (H5N1) Influenza virus also destroys muscle cells in the lungs making it very hard for sufferers to breathe, especially for those that already suffer respiratory diseases such as asthma making it difficult to breathe without assistance of ventilators. The (H5N1) contains 8 genes meaning it could mutate easily with the DNA of other diseases as had happened with avian flu which mutated with human strands of influenza, which have led to some severe and rare cases to which have stood out as long term effects such as of damage on muscle cells on the lungs (Wilson, date accessed 15/5/2013), but there is very little evidence apart from some cases to support these suggested long term effects. The full understanding of short and long term effects are still unknown. 3. Treatment and Prevention The Avian Influenza has of yet no cures that have been produced that are 100% effective against this disease due to (H5N1) ability to mutate at a rapid rate. ...read more.

Vietnam reports that 23 of the country?s 64 provinces, approximately 3 million chickens have either been destroyed or killed by the Avian Influenza virus in Vietnam. December 2003 Leopards and Tigers at the Thailand zoo die after eating fresh poultry (Chicken) that had un-knowingly been affected with the (H5N1), it had been the first time that this virus had been seen in these large felines, this had sparked major concern as to how serious this virus in fact been. And continue to spread through domestic cats due to the cat food containing chicken and duck. Feb. 2 2005 news that Cambodia has reported that an individual that had been infected was seriously ill (Ling Yen et al., 2008) November 2005 China has been reported to have quarantined 116 individuals January 2006 the avian flu has been reported by (WHO) to have spread to Turkey infecting 14 people, UN experts say there is little to no evidence stating the Avian Flu is spreading between humans (Adam, 2006). As of August 2007, there were a total of 322 confirmed human cases of the virus with confirmed deaths 195. In all the countries that have been affected Indonesia has the still standing highest amount of fatalities across the world at 84 (Hanson et al., 2007). There have been many strategies taken after the worst of the Avian Influenza including cleaner hygiene such as washing hands, cleaning the bird droppings regularly, and most importantly not mixing wild birds with domestic birds, and cooking poultry thoroughly. ...read more.