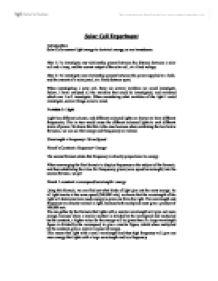 Investigate any relationship present between the distance between a solar cell and a lamp, and the current output of the solar cell, at a fixed voltage.

Aim 1: To investigate any relationship present between the distance between a solar cell and a lamp, and the current output of the solar cell, at a fixed voltage.

Aim 2: To investigate any relationship present between the power supplied to a bulb, and the current of a solar panel, at a fixed distance apart.

The second formula states that frequency is directly proportional to energy.

When rearranging the first formula to display frequency as the subject of the formula, and then substituting the value for frenquency given (wave speed/wavelength) into the second formula, we get:

When conducting these experiments, there are not many safety issues, because we will not be dealing with high currents/voltages. The heat of the wires and the lamp may be hazardous to touch; therefore we will not touch these when they are on.

On this table are the results of the first experiment. In this experiment, I varied

On the last graph, the results curve up at the end. This is the closest thing to anomalous results I could find, but this may be a correct finding, or may be not, but if it is not correct, it could be the fault of bad result noting (only I did the experiment, so had to read 4 meters at once).

If I were to redo this experiment, I would do it in a completely dark room, and have results taken automatically, by a computer, and investigate the changes between different frequencies (colours) of light.

When looking at the graphs I made with my results that I took, I can see that generally there are very strong trends, but there are some anomalies in my data. Looking at the graph for my second experiment, the one where distance is plotted against √(1/output of current), we can see several anomalous points.