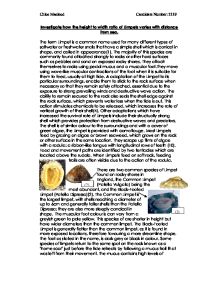 Investigate how the height to width ratio of Limpets varies with distance from sea. The term Limpet is a common name used for many different types of saltwater or freshwater snails that have a simple shell which is conical in shape, and coiled in appearance(1). The majority of this species are commonly found attached strongly to rocks or other hard surfaces such as pebbles and sand on exposed rocky shores. They attach themselves to rocks using pedal mucus and a muscular foot.They move using wave-like muscular contractions of the foot when it is suitable for them to feed, usually at high tide. A adaptation of the Limpet to its particular surroundings, enable them to stick to the rock surface when necessary so that they remain safely attached, essential due to the exposure to strong prevailing winds and destructive wave action. The ability to remain secured to the rock also seals the shell edge against the rock surface, which prevents water loss when the tide is out. This action stimulates chemicals to be released, which increases the rate of vertical growth of their shell(4). Other adaptations which have increased the survival rate of Limpets include their structually strong shell which provides protection from destructive waves and predators. The shell is of similar colour to the surroundings and with a cover of green algae, the Limpet is provided with camoflauge. Most Limpets feed by grazing on algae or brown seaweed, which grows on the rock or other surface in the same location. They scrape up films of algae with a radula; a ribbon-like tongue with longitudinal rows of teeth (10). Food and movement paths are identified by two tentacles which are located above the rudala. When Limpets feed on soft rock, feeding trails are often visible due to the action of the radula. There are two common species of Limpet found on rocky shores in England, the Common Limpet (Patella Vulgata) ...read more.

The main source of heat will be from the suns radiation and the presence of vegetation. * Humidity - the saturation of the air will be measured using a humidity sensor. All of the Abiotic factors will be observed as little can be done to control them, However they may influence the size, number or growth rate of Limpets on the shore. To introduce minimal control I will collect all results within two days, visiting the shore at the same time on both days when the tide is out. Within this short time period weather conditions are unlikely to have changed dramatically enough to affect my results greatly; however this will be taken into consideration when analysing. Risk Assessment: * When working on the rocky shore I will make sure that all movements are made safely, especially when moving over seaweed covered rocks which are slippery which could result in serious injury. * I must be aware of tides retreating at a rapid rate and if approaching from behind, I will ensure that I progress up shore, or start at the top of the beach at high tide to avoid being swept out to sea and risk of drowning. I will find out tide times before starting the data collection. * Sea water temperatures are cold at present, therefore slipping on rocks or loose objects into the sea could result in Hypothermia therefore measures will be taken to ensure this risk will be minimised, such as working on the rocky shore at high tide. * I will ensure that I do not walk directly under cliff faces, to minimise the risk of falling objects causing a serious injury. * I will regularly drink fluids whilst working on the rocky shore to prevent dehydration. * Due to the risk of illness I will wash my hands thoroughly before eating or drinking. I will be working with live organisms and seaweed which could carry parasitic organisms or be contaminated by other substances or chemicals carried in the water. ...read more.

Another limitation that should be taken into consideration is the time period in which the information was collected. The original results and the repeats were collected on different days and weather conditions were not recorded on the first day of data collection. Therefore a change in most Abiotic factors that were observed is almost definite. However this too, is not likely to affect my results considerably as I was never able to control the Abiotic factors, I only planned to observe them and would not have been able to control their changes unless all results were collected on the same day. However, this would not be feasible due to the tide times and the time period needed to collect a sufficient amount of data. When repeating the investigation, I may have measured the same Limpets as before, which would explain why some of my repeats were the same as my originals; therefore my repeats were not 100% accurate. To improve this investigation, a third set of repeats would have been made in order to further increase the accuracy and reliability of my results. This would be made easier if the Limpets which were measured each time were marked in some way, so that they would not be included in any repeats but ethical implications would suggest that this would not be fair. Also by repeating the measurements at distances which did not produce consistent results, would indicate if there was an error of judgement or if there is an Abiotic factor affecting the lower measurements. I would also use a more accurate device to measure the shell height such as a specialised calliper, as this would ensure that the error of estimation is reduced. By conducting the same investigation on an exposed shore, a comparison could be made against the two and conclusions could be drawn considering the different factors affecting the growth of Limpets. Also by analysing the differences in beach profiles I can determine how the absence of large rocks affects the Limpets d imensions and ?? ?? ?? ?? Chloe Macleod Candidate Number: 2119 ...read more.