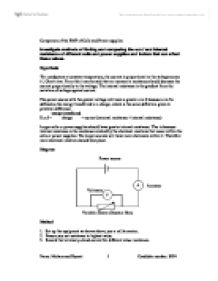 Investigate methods of finding and comparing the e.m.f and internal resistance of different cells and power supplies and factors that can affect these values.

Evaluation The results of the experiment could not only be inaccurate, but can also prove to be inconclusive, as there was a great deal of errors that could cause any number of faults in the experiment. The errors include: 1. Initial voltage not equal to 1.5V. 2. The time period for which a source has been turned on or off for. 3. The temperature of the source at different intervals in time. 4. The age of a source (also affects the output voltage). The faults that could occur are: 1. Imprecise measurements of the terminal p.d and the current. Inaccurate values will give imprecise results for the e.m.f and internal resistance. 2. High temperatures can cause a resistance that would decrease the current. However, these errors and faults would give slightly imprecise results, they would have little effect on the outcome of the experiment. This means that the experiment should still be considered a valid success. Overall the experiment is correct and does prove that the greater the supply voltage, the greater e.m.f and internal resistance. Yet, it neither proves nor disproves the case of greater chemical content giving greater internal resistance. Name: Mohammed Husnat 1 Candidate number: 9834 ...read more.