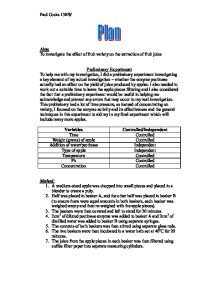 Investigate the effect of fruit variety on the extraction of fruit juice.

Aim: To investigate the effect of fruit variety on the extraction of fruit juice Preliminary Experiment To help me with my investigation, I did a preliminary experiment investigating a key element of my actual investigation - whether the enzyme pectinase actually had an effect on the yield of juice produced by apples. I also needed to work out a suitable time to leave the apple pieces filtering and I also considered the fact that a preliminary experiment would be useful in helping me acknowledge and prevent any errors that may occur in my real investigation. This preliminary had a lot of time pressure, so instead of concentrating on variety, I focused on the enzyme activity and its effectiveness and the general techniques in this experiment to aid my in my final experiment which will include many more apples. Variables Controlled/Independent Time Controlled Weight (grams) of apple Controlled Addition of water/pectinase Independent Type of apple Independent Temperature Controlled Ph Controlled Concentration Controlled Method: 1. A medium-sized apple was chopped into small pieces and placed in a blender to create a pulp. 2. Half was placed in beaker A, and the other half was placed in beaker B (to ensure there were equal amounts in both beakers, each beaker was weighed empty and then re-weighed with the apple pieces). 3. The beakers were then covered and left to stand for 30 minutes 4. 2cm3 of diluted pectinase enzyme was added to beaker A and 2cm3 of distilled water was added to beaker B using separate syringes. 5. The contents of both beakers was then stirred using separate glass rods. 6. The two beakers were then incubated in a water bath set at 40oC for 20 minutes. 7. The juice from the apple pieces in each beaker was then filtered using coffee filter paper into separate measuring cylinders. 8. The volume of apple juice obtained from the apple pieces in each beaker was recorded at 5 minute intervals for 40 minutes and recorded in a table Results and conclusion: Granny Smith apple Beaker Volume of juice produced in X (mins) ...read more.

Things to note which are not in my control but will affect the results of the experiment * Different densities of tissue (cell volumes and intercellular air-spaces) * Different percentage composition of cell wall components (with different susceptibilities to whatever maceration process used) * Different concentrations of sugars and acids in juice * Storage previous to experiment and sources of where they were grown Fair Test * The three key variables (described above) must be controlled throughout the experiment because as explained in the research, they have a great effect on the efficiency of enzymes and if slightly altered, could therefore affect the pectinase. The temperature will be controlled by putting each beaker in a water bath set at 40oC for 20 minutes before actually filtering the apple juice. The pH and concentration of everything will be kept constant throughout the experiment. * The same amount of apple pulp will be put in each beaker and this will be controlled by weighing exact amounts of apple pieces. * Distilled water will be used instead of tap water to ensure that no unwanted substances will interfere with the control experiment i.e. distilled water is purer. * The volume of the diluted pectinase enzyme/distilled water used will be the same for each experiment. * The diluted pectinase enzyme used will be the same concentration for all experiments. * Each stop clock will be started as soon as all the apple pieces are in the filter funnels; therefore each experiment gets the same time to produce the apple juice- 40 minutes. * The readings on the measuring cylinder will be noted down very carefully because it is quite easy to make a mistake when reading off such small scales. * A measuring cylinder with a large scale will be used to measure out the amount of apple juice produced because it is much more accurate. Risk assessment: In this investigation, there are many areas where care must be taken. ...read more.

Also the validation of results can be called into disrepute perhaps through the problems of sources and storage and the nature of results tending to vary from one experiment to the next as there was no repition. In overall conclusion both variables had the null hypothesis rejected from the results gathered. There is much evidence to oppose the conclusions drawn as there are issues such as sample size which had an effect. The line graphs for the treated and untreated comparisons show a vastly varied line and no consistency. The anomaly of the Cox apple in both untreated and treated supports the notion of a sample size being too small as it has no gradual incline to it as no other apples come close. The lack of repetition is critical to analysis and the ability to create averages such as means to conclusive state any rejection or acceptance of a hypothesis. This provides a firm base for further investigation of additional evidence to support or not support the hypothesis. In a future investigation I would increase sample size, providing a wider range of results and analysing more in depth of the extent of any variation if any at all. Apples would be analysed from there source they came from and sufficient investigation to any allowances that may have to be made. To alter the experiment for better accuracy I would use the pectin enzyme at its optimum temperature, 60�C, to judge weather or not this affects results in comparison to using it at 40�C in this experiment. The potential juice that remained after my experiment finished after 40 minutes causes much uncertainty to how much juice each apple really contains. So a future investigation could research into this and leave the apples for a much longer time such as a day or 2 for the full or at least most of juice to be filtered down. Evaporation would have to be completely stopped as this would affect results. Paul Cocks 13RW Paul Cocks 13RW ...read more.