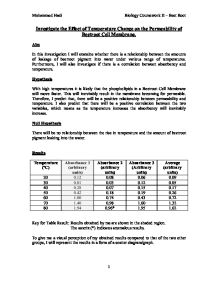 Investigate the Effect of Temperature Change on the Permeability of Beetroot Cell Membrane.

Investigate the Effect of Temperature Change on the Permeability of Beetroot Cell Membrane. Aim In this investigation I will examine whether there is a relationship between the amounts of leakage of beetroot pigment into water under various range of temperatures. Furthermore, I will also investigate if there is a correlation between absorbency and temperature. Hypothesis With high temperatures it is likely that the phospholipids in a Beetroot Cell Membrane will move faster. This will inevitably result in the membrane becoming for permeable. Therefore, I predict that, there will be a positive relationship between permeability and temperature. I also predict that there will be a positive correlation between the two variables, which means as the temperature increases the absorbency will inevitably increase. Null Hypothesis There will be no relationship between the rise in temperature and the amount of beetroot pigment leaking into the water. Results Temperature (�C) Absorbance 1 (arbitrary units) Absorbance 2 (arbitrary units) Absorbance 3 (Arbitrary units) Average (arbitrary units) 20 0.12 0.08 0.06 0.09 30 0.01 0.03 0.12 0.05 40 0.28 0.07 0.15 0.17 50 0.42 0.18 0.19 0.26 60 1.00 0.74 0.43 0.72 70 1.40 0.98 1.60 1.32 80 1.94 0.96* 1.95 1.62 Key for Table Result: Results obtained by me are shown in the shaded region. ...read more.

This means at higher temperatures more of the pigment or anthocyanin would leak out, in turn increasing the rate of diffusion. Therefore in this investigation I have decided to investigate the temperature variable and use the colour change, caused by the anthocyanin as the independent variable. The results, which I received, seem to support this fact, in that as the temperature increased the percentage transmission of light read by the colorimeter decreased. Evaluation of Evidence The graph produced from my results seem to illustrate the same trend as the two pooled results, which is that there is a direct proportionality between the increase in temperature and the absorbance. This indicates that my results were somewhat reliable. Throughout the experiment I used a syringe for measuring volume, which consequently would have increased precision, as this assured the measurements used were to the nearest millimetre. Moreover, I also used a stopwatch, which ensured that the time in which I allowed each set of beetroot discs to be heated in water was kept constant. I also used the same cork borer to cut out each beetroot cylinder, which indicates that all the beetroot cylinder should have been more or less identical to each other. Mohammed Hadi Biology Coursework II - Beet Root 1 ...read more.

This is a fairly average essay that discusses the results of a practical looking at leakage of colour from a beetroot.

It does not explain the practical at all only looks at the results. It would be helpful to have had further details of how results were collected as it leads to a little confusion.

There are areas where the biology is a little inaccurate but only in minor parts. The statistical calculations are, however, a good example.