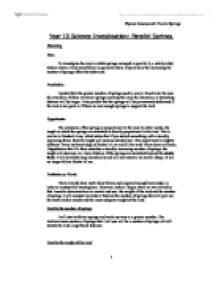 Investigate the way in which springs arranged in parallel (i.e. side by side) behave when a fixed load (force) is applied to them. Explain how the increasing the number of springs affect the behaviour.

To investigate the way in which springs arranged in parallel (i.e. side by side) behave when a fixed load (force) is applied to them. Explain how the increasing the number of springs affect the behaviour.

The extension of the springs is proportional to the load. In other words, the length in which the springs are stretched is directly proportional to the load. This is similar to Hooke’s Law, which states that if you stretch something with a steadily increasing force, then the length will increase steadily too. This experiment is slightly different. From my knowledge of Hooke’s Law and all the work I have done on forces, I hypothesize that if a force stretches a steadily increasing number of springs, the length will decrease in a linear fashion. If the springs are stretched beyond the elastic limit

The results that were obtained were very reliable and accurate. They can be easily used to prove that my predictions and hypotheses were wrong. The anomalities were very small and insignificant. The reasons why my results weren’t perfect were because:

My predictions were correct that the greater number of springs used to carry a fixed load, the less the extension and if there are fewer springs carrying the load, the extension, or stretching distance will by larger. My hypothesis which was based on Hooke’s Law was not completely correct but the springs did stretch further when less springs were used to carry the load. My results were good enough to support a firm conclusion.

I can suggest further work that would extend my investigation: