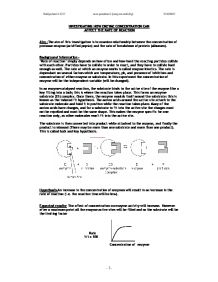 INVESTIGATING HOW ENZYME CONCENTRATION CAN

INVESTIGATING HOW ENZYME CONCENTRATION CAN AFFECT THE RATE OF REACTION Aim -The aim of this investigation is to examine relationship between the concentration of protease enzyme (acidified pepsin) and the rate of breakdown of protein (albumen). Background information - 'Rate of reaction' simply depends on how often and how hard the reacting particles collide with each other. Particles have to collide in order to react, and they have to collide hard enough as well. The rate at which an enzyme works is called enzyme kinetics. The rate is dependant on several factors which are temperature, ph, and presence of inhibitors and concentration of either enzyme or substrate. In this experiment the concentration of enzyme will be the independent variable (will be changed). In an enzyme-catalysed reaction, the substrate binds to the active site of the enzyme like a key fitting into a lock; this is where the reaction takes place. This forms an enzyme-substrate (ES) complex. Once there, the enzyme moulds itself around the substrate: this is known as the induced fit hypothesis. The amino acids around the active site attach to the substrate molecule and hold it in position while the reaction takes place. Many of the amino acids have charges, and for a substrate to fit into the active site the charges must not be repelled and must be the same shape. This makes the enzyme specific for one reaction only, as other molecules won't fit into the active site. The substrate is then converted into product while attached to the enzyme, and finally the product is released (There may be more than one substrate and more than one product). This is called lock and key hypothesis. Hypothesis-An increase in the concentration of enzymes will result in an increase in the rate of reaction (i.e. the reaction time will be less). Expected results- The affect of concentration on enzyme activity will increase. ...read more.

Carry out each concentration three times so that an average from the results can be obtained and that the precision and accuracy of the result can be evaluated. However carry out all the different concentrations once and then repeat the procedure, in case there is not enough time to repeat it. The procedure is simple to make sure it is repeatable. At the end hands must be washed so that if there were any chemicals on the hand they are removed and do not cause harm. The results obtained from the investigation will be firstly presented in a table so that the values can be systematically looked at and an average from the three trials can be worked out at the end, so that any tends/pattern or anomalies will be more easily distinguished. However a graph will then be produced as it will allow the result to be visualised better. Fair testing-To ensure that the test is fair so reliable and accurate results are obtained the only variable that will be changed is the concentration of enzyme as this will be constantly getting higher (Independent variable)and have an effect on reaction time. The control in this experiment will be the protein the protein, albumen as it will have to be kept constant throughout the investigation as this will ensure that the experiment is valid and give accurate results. All other variables that could affect the results will need to be controlled to ensure that the results are reliable and that it is a fair test. * Only the independent variable is changed enzyme concentration * A different syringe is used for the enzyme and protein, as this could pollute the substances and affect the reaction time of the other tests. * All equipment will be cleaned so that any substances do not affect the accuracy of the results * The test tubes will be moved as least as possible in between the experiments so reaction is not speeded up involuntarily. ...read more.

The lamp would be useful in detecting the clearness of the solution, which would result to the sensor giving off a noise. (A possible solution could also be that an automatic clock is also, which would give more definite results). * Enzymes do not form chemical bonds with the substrate, after the reaction, the products are released and the enzyme returns to its normal shape and is unchanged. As a result, the enzyme molecule can be reused. However if there are more enzyme molecules than are needed, adding additional enzyme will not increase the rate. However the maximum velocity of a reaction is reached when the active sites are almost continuously filled this is the 'saturation point'. In the experiment larger concentrations could have been used to identify at what point this occurred. * The reaction tome in starting and stopping the clock is bound to have been a bit different * The same mixing rod was used to mix all the solutions; this could have transferred particles from one of the tubes to the other, and so is not very reliable. * Thought was not taken into account how to control other factors that would have affected the time. For example a thermometer and water bath could have been used to monitor and keep the temperature constant and a buffer could have been used for the water PH. To improve the reliability-large replicates of the results should be made using the same procedure will be used and results that vary considerably should be discounted or repeated. As it would allow seeing the degree of error as greater the variation of replicates the greater the degree of error Further work- Only one type of enzyme was used therefore it can not really be concluded if this is the general trend for all enzymes. Another investigation with different enzymes but using the same protein could be conducted to see if the general trend is the same. To ensure that the results would be accurate the same methods, apparatus and precautions would need to be taken. ...read more.