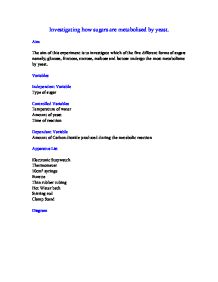 Investigating how sugars are metabolised by yeast

Investigating how sugars are metabolised by yeast. Aim The aim of this experiment is to investigate which of the five different forms of sugars namely; glucose, fructose, sucrose, maltose and lactose undergo the most metabolisms by yeast. Variables Independent Variable Type of sugar Controlled Variables Temperature of water Amount of yeast Time of reaction Dependant Variable Amount of Carbon dioxide produced during the metabolic reaction Apparatus List Electronic Stopwatch Thermometer 10cm� syringe Burette Thin rubber tubing Hot Water bath Stirring rod Clamp Stand Diagram Method * Prewarm Yeast and sugars in water bath at fixed temperature of 50�C. * When reached at required temperature, measure out 6cm� of yeast, with the help of a syringe, as well as 10cm� of glucose solution, first. * Pour into a boiling tube and fit with the rubber tubing. * Take the other end of the tubing and place under the upturned burette, which is filled with water in a bowl. * Read and record start volume of water on the burette. * Start the timer as soon as the rubber tubing is placed under the burette. * Time for maximum 10 minutes. * Stop the timer and record the change in volume on burette. * Repeat this exercise 3 times for each sugar for reliability. ...read more.

While conducting my investigation, the intention is to find out which of the sugars (glucose, fructose, sucrose, maltose and lactose) metabolizes yeast the most. Prediction [image010.jpg] I predict that the amount of carbon dioxide produced from the metabolism of glucose with yeast will be much higher than the same metabolism of fructose, sucrose, maltose and lactose. [3]The chain form of D-Glucose The chain form of D-Glucose Space filling model of Glucose Glucose is the simplest monosaccharide sugar therefore it has fewer bonds to be broken by the enzymes in the yeast. In addition, the reaction rates will much faster so more of the yeast will metabolize glucose at the same time. Even so, Glucose is a ubiquitous fuel in biology more widely used than fructose and other sugars. Analysis Measure over 10 mins Volume of Carbon Dioxide in cm� 1 2 3 4 Average Glucose 1.4 1.2 1.2 1.0 1.2 Sucrose 0.9 1.0 1.1 0.9 0.975 Maltose 0.9 0.9 1.0 1.2 1.0 Lactose 0.3 0.0 0.1 0.0 0.1 Fructose 1.2 1.3 1.3 1.1 1.225 The volume of carbon dioxide produced was found out with the following equation:- Start volume of water (cm�) - End volume of water (cm�) = Volume of Carbon Dioxide produced (cm�) The average is the mean of the results from the 4 trials. ...read more.

Increasing the amount of substrate (e.g fructose) also will prove optional. Repeating the experiment as much as possible is another good idea for more accurate results. The burette is the most accurate and suitable piece of equipment for this investigation so it would be unnecessary to change this method. To extend this experiment, we could conduct a comparative study between a macromolecule (starch) and a micro molecule ( glucose). Starch suspension will be used to metabolize by yeast using the same method that was used for this experiment. In a beaker, that is clearly labeled STARCH, the two liquids (starch suspension and yeast) will be poured in and mixed with the stirring rod. Similarly, glucose solution will be metabolized by yeast in another beaker, labeled GLUCOSE on it. Within a certain time limit, the amount of carbon dioxide produced in each of the beakers will be measured and recorded. This is obtained by finding the difference in the start and end volumes of water in the upturned burette. The independent and controlled variables will remain the same just like it did for this experiment. The expected result is that glucose will undergo the most metabolism by yeast than starch. This is because glucose is already broken down in its simplest form whereas starch still needs to. The aim of this extension is find out whether the action of yeast is quicker on a substrate that has low molecular weight (glucose) or high molecular weight (starch). ...read more.

The experimental method, data collected and background information are all good. A little more attention to detail and careful use of scientific language would have improved this account.