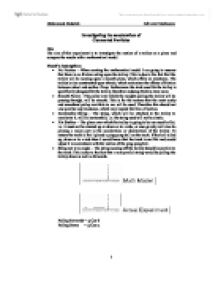 Investigating the acceleration of Connected Particles

Investigating the acceleration of

The aim of this experiment is to investigate the motion of a trolley on a plane and compare the results with a mathematical model.

To work out the acceleration of the actual experiment using the above formula.

All the accelerations have been worked using the above technique and have been presented in the table of results below.

2) hence doubling the error in timing.

The other two graphs of M = 998g & 1498g, there are no anomalous results. I think the reason for this is, because of the increased weight of the trolley; the trolley will clearly be travelling slower, hence giving more accurate and reliable timing.

As can be seen from the above results the math model did fairly well to model the real life situation of two connected particles.

The model I designed does not match the results I obtained in the experiment. This is because either I overlooked some variable quantities or the initial assumptions were flawed. On the other hand it may have been the procedure, which was at fault. In any case all these must be investigated into further. Each assumption ought to be scrutinized independently to deduce whether it is viable with regards to the experiment, in that, some assumptions were unnecessary and others were not made.