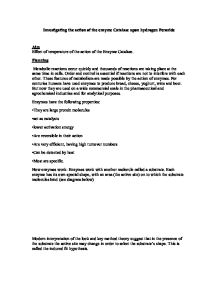 Investigating the action of the enzyme Catalase upon hydrogen Peroxide

Investigating the action of the enzyme Catalase upon hydrogen Peroxide Aim Effect of temperature of the action of the Enzyme Catalase. Planning Metabolic reactions occur quickly and thousands of reactions are taking place at the same time in cells. Order and control is essential if reactions are not to interfere with each other. These features of metabolism are made possible by the action of enzymes. For centuries humans have used enzymes to produce bread, cheese, yoghurt, wine and beer. But now they are used on a wide commercial scale in the pharmaceutical and agrochemical industries and for analytical purposes. Enzymes have the following properties: �They are large protein molecules �act as catalysts �lower activation energy �Are reversible in their action �Are very efficient, having high turnover numbers �Can be detected by heat �Most are specific. How enzymes work- Enzymes work with another molecule called a substrate. Each enzyme has its own special shape, with an area (the active site) on to which the substrate molecules bind (see diagram below) Modern interpretation of the lock and key method theory suggest that in the presence of the substrate the active site may change in order to select the substrate's shape. This is called the induced fit hypothesis. Catalase is an enzyme capable of converting hydrogen peroxide into water and oxygen by the following reaction: 2 H202 ---Catalase Enzyme---> 2 H20 + 02 Like other enzymes, catalase is simply a reaction catalyst; it helps the reaction reach completion without adding or removing molecules. ...read more.

The concentration may affect the results so the results could show that the 30�c temperature test had a peculiar reading. As I am testing for the differences in temperature this will be the only variable that will differ. Other possible variables that could have an affect are: concentration, mass of yeast, volume of hydrogen peroxide, use of inhibitors etc. Mass of yeast could cause a discrepancy in the results because when there is more yeast, there is more catalase. When there is more catalase there is more chance of hydrogen peroxide molecules bumping into catalase molecules. More collisions will take place increasing the speed of reactions. To stop this I will measure out the same mass of yeast each time. This will also be the same with hydrogen peroxide so I will also measure out the same volume of hydrogen peroxide each time. Another consideration that needs to be taken into account is that the experiment may produce a couple of anomalous results. To combat this I will take 3 Measurements from each concentration, meaning that any anomalous results can be easily spotted as they will be different from the other two. This result can then be scrapped and that particular result redone. Accuracy In order to make my investigation go to plan I will be as accurate as I can be so I will measure to the correct measuring size. � Measure the volume in cm� and amount of potato in grams to make sure that they are exactly the same mass before using them in the experiment. ...read more.

Some gas would have escaped in that period and the accuracy of my data would be lowered. The delay in starting my stopwatch may also explain why the first five seconds were so much quicker than the rest, and extra half second may have been added on in this time. This period would not have really mattered if I was able to do this in the same amount of time every time. However sometimes the cork was more difficult to get on the flask and took a longer time. This would have affected particular results, possibly the slightly anomalous results. A modification I would make to improve the experiment is to have the hydrogen peroxide already in the flask as normal, but then I would also have the catalase in the flask as well also inside a test tube so they would not react. I could then attach the cork onto the flask before the experiment starts. Then all I have to do is shake the flask to knock the test tube over to start the experiment. I would also be able to start the stopwatch with my other hand to I could eliminate the problem I stated above. On top of that I would have also stopped the problem of not pouring all the yeast into the flask, as it would already be there. If I could expand the experiment I would like to test a smaller range around 40�c to see what the exact optimum temperature really is. I would use the modification I stated above but would do more repeats of each temperature, to make sure I had done it correctly. ...read more.