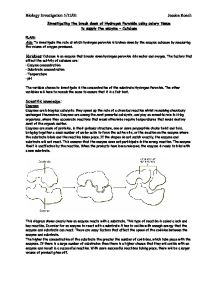 Investigating the break down of Hydrogen Peroxide using celery tissue to supply the enzyme - Catalase PLAN: Aim: To investigate the rate at which hydrogen peroxide is broken down by the enzyme catalase by measuring the volume of oxygen produced. Variables: Catalase is an enzyme that breaks down hydrogen peroxide into water and oxygen. The factors that affect the activity of catalase are: � Enzyme concentration � Substrate concentration � Temperature � pH The variable chosen to investigate is the concentration of the substrate Hydrogen Peroxide. The other variables will have to remain the same to ensure that it is a fair test. Scientific knowledge: Enzymes Enzymes are biological catalysts; they speed up the rate of a chemical reaction whilst remaining chemically unchanged themselves. Enzymes are among the most powerful catalysts, and play an essential role in living organisms, where they accelerate reactions that would otherwise require temperatures that would destroy most of the organic matter. Enzymes are made of proteins, in their globular structure, one or more polypeptide chains twist and fold, bringing together a small number of amino acids to form the active site, or the location on the enzyme where the substrate binds and the reaction takes place. If the shapes do not match exactly, the enzyme and substrate will not react. This ensures that the enzyme does not participate in the wrong reaction. The enzyme itself is unaffected by the reaction. When the products have been released, the enzyme is ready to bind with a new substrate. This diagram shows clearly how an enzyme reacts with a substrate. This type of reaction is called a lock and key reaction. In order for an enzyme to react with a substrate it has to collide with enough energy that the enzyme and substrate can react. There are many factors that affect the speed of the collision between the enzyme and substrate. ...read more.

* The volume of celery solution will not be adjusted, as the same solution will be used for each different substrate concentration tested. The solution contains 50% celery and 50% water. * The volume of hydrogen peroxide solution will also remain the same but the concentration will vary. * The volume of celery solution used for the different concentrations will be 10cm3. * The pH level will not be altered because the same solution will be used. * None of the solutions will be stirred and they will all use the same apparatus. * The equipment should be kept the same to ensure all results are taken without any advantages or disadvantages. * The celery will be kept covered as much as possible and will only make contact with the Hydrogen Peroxide when the stopwatch is started. * The different concentrations will all be timed for 1 minute. To insure the test is as reliable as possible the experiment will be repeated three times for each of the varying concentrations. To make sure the experiment is carried out safely and fairly safety goggles will be worn, as Hydrogen Peroxide can be dangerous if it gets into your eyes. All laboratory surfaces will be cleared and other lab rules must be followed. When the celery is measured out on the scales some polythene will be placed under it so that none of the celery is absorbed into the scales. All measurements of celery will be made to 2d.p. This will increase accuracy because the minimum and maximum it can weigh will be 0.995g and 1.005g. If it was measured to the nearest gram, the measurements could be from 0.5g to 1.5g, which would be totally inaccurate and would make the experiment unfair as massess could vary. METHOD: To carry out the experiment the apparatus will be set out as shown By taking three repeat readings of the experiment it will mean that in my results I can use the average number, which will help make my results more accurate. ...read more.

This would show greater depth into the topic and hopefully provide more conclusive results as to the conditions needed for the optimum yield of the products given off when hydrogen peroxide reacts with catalase. From background research it is possible to discover that a rise in temperature increases the rate of enzyme-controlled reactions; a fall in temperature slows them down. In many cases a rise of 10oC will double the rate of reaction, but above 50oC the enzymes, being proteins, are denatured and stop working. Knowing this it is possible to compose an experiment which will test if the above information is true for the enzyme, catalase and work out the temperature at which the rate of reaction is highest. Prediction It is predict that the enzyme catalase will only work at temperatures above 10oC and below 50oC. The optimum reaction rate will lie somewhere between 30oC and 40oC. As catalase is an enzyme, which is used in the body, it is likely to have a high yield at 37oC, which is body temperature. The predicted graph shows how the rate of reaction doubles as the temperature increases by 10oC and how below 10oC and above50oC the catalase is denatured and does not function. Method The apparatus would be set up in the same way as the experiment for substrate concentration only using an ice bath or Bunsen burner to get the celery solution to the required temperature. 1. Blend 100cm3 of celery with 100cm3 of water in a food processor. 2. Use 10cm3 of the celery solution and place in a chronicle flask. 3. Cool to 10oC using an ice bath. 4. Put 10cm3 of hydrogen solution into the chronicle flask. 5. Leave to react for 1 minute. 6. Record the results. Repeat for 20, 30, 40, 50 and 60oC. Work out average O2 produced for each temperature and rate of reaction. Draw graphs using the results collected. From the graphs conclusions can be drawn as to the nature of catalase and the best conditions needed for the fastest reaction rate. Biology Investigation 5/12/01 Jessica Roach ...read more.