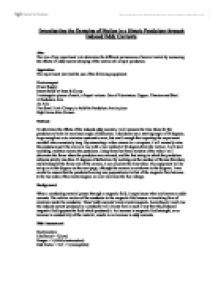 The aim of my experiment is to determine the different permeances of several metals by measuring the effects of  eddy current damping of the motion of a simple pendulum.

The experiment involved the use of the following equipment:

3 rectangular pieces of metal, of equal volume. One of Aluminium, Copper, Titanium and Steel.

To determine the effects of the induced eddy currents, I will measure the time taken for the pendulum to halve its maximum angle of deflection. I decided to use a starting angle of 30 degrees, large enough so as to minimise systematic error, but small enough that repeating the experiment wouldn't take excessively long. By connecting a video camera to a computer, I will manually raise the pendulum until the arm is in line with a line marked at 30 degrees from the vertical. I will start recording, and then release the pendulum. Using frame by frame analysis of the video I will determine the frame when the pendulum was released, and the first swing in which the pendulum achieves strictly less than 15 degrees of deflection. By working out the number of frames this takes, and dividing by the frame rate of the camera, I can calculate the time taken. The equipment will be set up as in the diagram on the next page, although the camera is not shown in the diagram. I was careful to ensure that the pendulum's swing was perpendicular to that of the magnetic flux between to the two sides of the electromagnet, so as to maximise the flux linkage.

Overall, the experiment is not a particularly dangerous one. There aren't any very risky procedures, and hence the likelihood of all accidents is low. The currents and voltages being used may, at worst, cause pain and burns, but the chances of electrocution are very low. Although heavy equipment is being used (namely the electromagnet core), it is not being moved regularly and as such does not present a serious risk, nor a reasonable chance of injury. 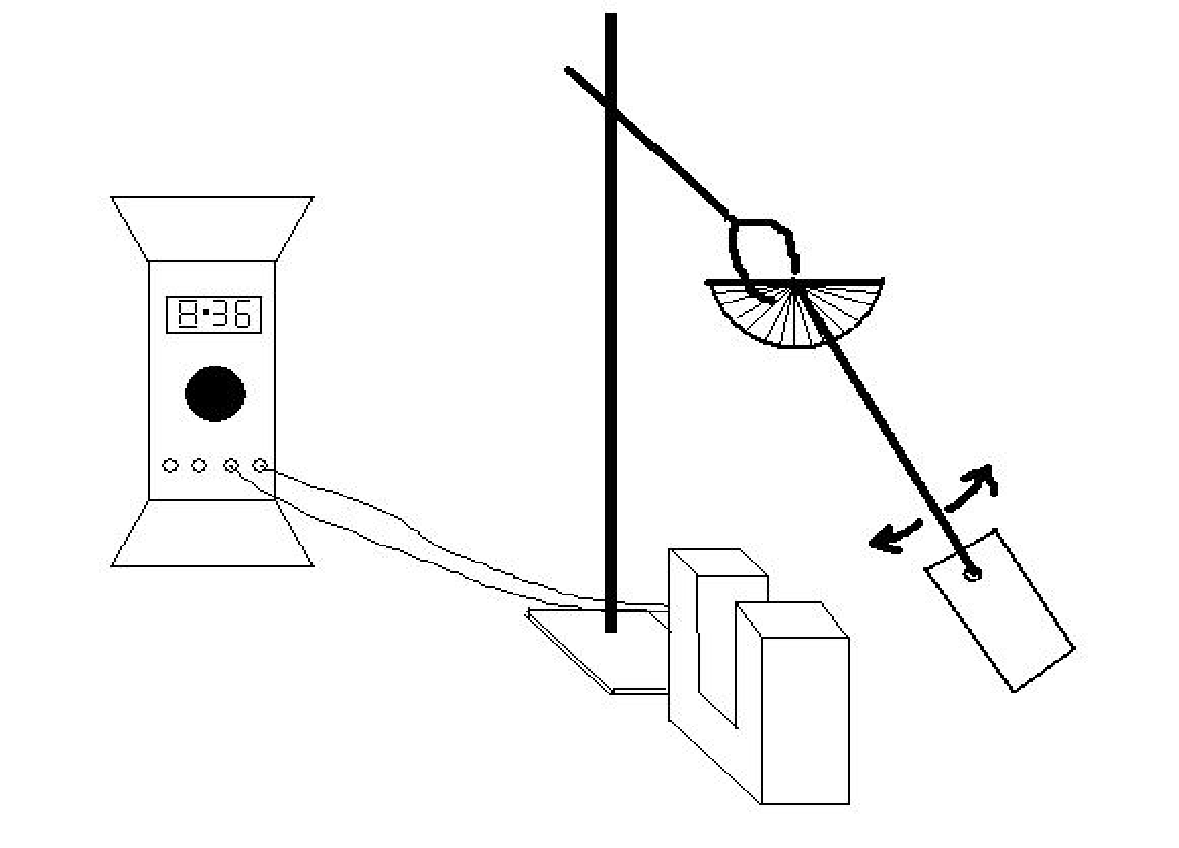 Other than the single anomaly, highlighted in red, the results of this experiment were very consistent, with at most .6 of a second difference between any two repeats. Overall, this method has proven to give good results in terms of consistency. The main limitations in my experiment were the maximum frame rate of the camera, and the fact that not all frames were recorded, as some were 'dropped' during transmission from camera to computer.  I made sure that I got the best results I could by setting the camera to it's maximum frame rate of 30 frames per second.

The results are not what one would expect. My background research suggested that an increase in conductivity would result in an increase in the induced eddy currents. Hence, a decrease in resistance would have the same effect, with conductivity being equivalent to (1/resistance). Following are typical values for the resistance of the metals I tested, in ascending order:

Thus one would expect Copper to be effected most by the induced eddy currents, when it was in fact quite the opposite. One possible explanation for this would be to do with the fact that the metals have very different densities. Because of the differences in densities between the metals, it was impossible to keep constant both the volume and the mass. Having opted to keep the volume the same, there was large variation between the masses of the metals. Looking now at a table comparing the densities of the materials (on the next page), we see the vast difference between the density of aluminium and that of the other metals. It seems that the large percentage decrease in aluminium was simply due to its lower mass, and therefore decreased momentum. In fact, the results seem to follow exactly the trend represented by the density – that is, the greater the density, the greater the momentum, and thus the less effective the eddy current dampening.

All in all, the experiment did not achieve its goal. Whilst the method did yield good results, the factors I was trying to measure were simply too small when compared to others over which I had little control.

I did not seek any help throughout the duration of my coursework.