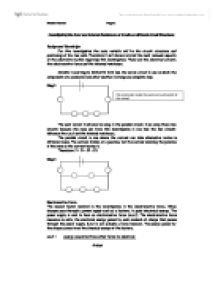 Investigating the E.m.f and Internal Resistance of 2 cells on different circuit Structures.

Investigating the E.m.f and Internal Resistance of 2 cells on different circuit Structures

Circuits: According to Kirchoff’s first law, the series circuit is one in which the components are connected one after another, forming one complete loop.

The next circuit I will also be using is the parallel circuit. I am using these two circuits because the main aim from this investigation is see how the two circuits influence the e.m.f and the internal resistance.

The parallel circuit is one where the current can take alternative routes in different loops. The current divides at a junction, but the current entering the junction is the same as the current leaving it.

e.m.f =        energy converted from other forms to electrical

The electromotive force in a closed circuit is also equal to the sum of the potential difference. Therefore:

There were fortunately not any other anomalous results which is very fortunate and this meant I had a reasonably more accurate result table compared to others in the group, as I had compared my results with others and I believe my results are extremely accurate to full human capabilities excluding other physical factors of cell heating up and creating resistance and the fact the resistors could also have been faulty and below or above the stated value they were given by the manufacturer.

The graph showed a relatively straight line which corresponded to my graph hypothesis for each circuit.

In series circuit with two cells the graph showed a relatively straight line with the p.d across each resistor ranging form 2.5 – 3.0 volts. This is very close to the e.m.f 2.96. As the current was increasing the voltage was decreasing which obeyed ohms law of ohmic conductors but inversely proportional. I extended the line to calculate the e.m.f and substituted the value of x (I) for the current into the equation V = -rI + E to correspond to y = mx + c

In a parallel circuit the trend is exactly the same to the trend in the above circuit, however the values were halved. That was the only difference.

How could the investigation process be enhanced?