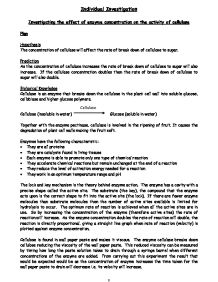 Investigating the effect of enzyme concentration on the activity of cellulase.

Individual Investigation Investigating the effect of enzyme concentration on the activity of cellulase Plan Hypothesis The concentration of cellulase will affect the rate of break down of cellulose to sugar. Prediction As the concentration of cellulase increases the rate of break down of cellulose to sugar will also increase. If the cellulase concentration doubles then the rate of break down of cellulose to sugar will also double. Biological Knowledge Cellulase is an enzyme that breaks down the cellulose in the plant cell wall into soluble glucose, cellobiase and higher glucose polymers. Cellulose (insoluble in water) Glucose (soluble in water) Together with the enzyme pectinase, cellulase is involved in the ripening of fruit. It causes the degradation of plant cell walls making the fruit soft. Enzymes have the following characteristic: * They are all proteins * They are catalysts found in living tissues * Each enzyme is able to promote only one type of chemical reaction * They accelerate chemical reactions but remain unchanged at the end of a reaction * They reduce the level of activation energy needed for a reaction * They work in an optimum temperature range and pH The lock and key mechanism is the theory behind enzyme action. The enzyme has a cavity with a precise shape called the active site. The substrate (the key), the compound that the enzyme acts upon is the correct shape to fit into the active site (the lock). If there are fewer enzyme molecules than substrate molecules then the number of active sites available is limited for hydrolysis to occur. The optimum rate of reaction is achieved when all the active sites are in use. So by increasing the concentration of the enzyme (therefore active sites) the rate of reaction will increase. As the enzyme concentration doubles the rate of reaction will double, the reaction is directly proportional, giving a straight line graph when rate of reaction (velocity) ...read more.

From the pattern of the graph it is difficult to determine which results are anomalous. However the result at 0.4% concentration could be because it does not follow the pattern of the graph, as could the one at 1% concentration as it has the largest error bars. When evaluating this investigation I do not think the results obtained were very reliable. From the results I can conclude that my general prediction that increasing enzyme concentration will result in an increase in the rate at which cellulose is broken down is correct. However the results do not confirm my specific prediction that doubling enzyme concentration leads to a doubling of the hydrolysis of cellulose. To be able to draw a firm conclusion regarding this part of my prediction more practical evidence needs to be collected. This evidence could be obtained by using the modifications previously mentioned, namely: * Make smaller increases in concentration of the enzyme (0.1% instead of 0.2%) * Increase repeats of experiment at each enzyme concentration (5 instead of 3) * Maintain a constant temperature (insulate syringe barrel to reduce heat loss) * Ensure accurate measurement of substrate (measure substrate in syringe barrel) This investigation could be extended to determine how the breakdown of cellulose is affected by the enzyme, cellulase, by changing the other variables that affect enzyme activity i.e. temperature, pH, and substrate concentration. So for instant temperature could be changed in this investigation instead of the enzyme concentration, which would need to be kept constant. The same experiment and method could be used with the substrate, cellulose (2% concentration, (wall paper paste)) and the enzyme, cellulase (1% concentration) being heated to a range of temperatures e.g. 20-70�C at 10�C intervals in thermostatically controlled water baths. At each temperature the rate at which the cellulose/cellulase solution passes through the syringe barrel would be recorded. As in this experiment the rate 1/Time would be calculated and plotted on a graph. By investigating this variable, temperature, a conclusion could be made regarding the optimum temperature of substrate and enzyme required for the hydrolysis of cellulose to glucose using the enzyme, cellulase. ...read more.

*****
A very good account of the investigation with great attention to detail and A level biological terminology used throughout. The author writes very clearly. The analysis and evaluation sections are of a very high standard.