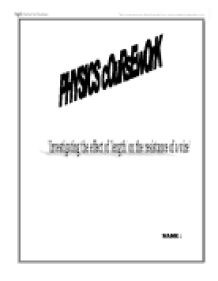 Investigating the effect of 'length' on the resistance of a wire

Investigating the effect of length on the 7

For this investigation, I first decided to list all the factors which I think may affect the resistance of a wire and the reason for their importance. These factors are:

From the factors above, I chose the length of the wire to investigate.

I obtained most of my information from:

I used the sources above to choose the suitable equipment needed for my investigation including the type (material) of wire and its appropriate diameter. I also used them to write about the background information or scientific knowledge.

My aim is to investigate ‘how the length of a wire will affect its resistance’.

I will have a minimum length of 10cm for the wire. Anything below this length would be likely to cause quick overheating of the wire.I will keep equipment away from edge of the table as it may fall on me or somebody else causing an injury. 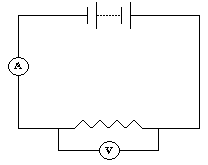 The ruler will be put in the centre of the wooden plank and it would be nailed into it by two nails. After the ruler has been anchored on the plank of wood, two screws will be screwed into the wooden plank at either ends of the ruler, the screws will also be touching the ruler. The wire chosen for the experiment will be tied around the screws more than once, to ensure that the wire is taut and has no kinks to give better accuracy in the results. The voltmeter will obviously be connected around the wire in parallel to the circuit and the ammeter will be connected in series to the circuit. I will allow the wire to cool for 30 seconds between each two readings. I will use a micrometer to measure the diameter of the wire. I will be taking results every 10cm between the 10cm and 90cm, this range and the intervals were chosen as I found it most appropriate from my preliminary test.

I set up the experiment using the equipment I mentioned in the planning section except that I also included a thermometer in the apparatus:

I would also take readings at every 5cm.To make sure that the wire has returned to its original temperature, I would leave a five minute gap between each two readings.In order to control the temperature of the surroundings and keep it at a constant level and if I was able to I would conduct the experiment in a thermostatically controlled room.

My results would have been much more accurate if I had taken these factors into consideration, they would also be better if I make the appropriate improvements.

To extend the work that I have done, I would like to investigate the effect of varying the cross-sectional area of a wire on resistance. I can do this by using wires of different diameters but of the same material. My original method (with the improvements above) would remain the same but without changing the length. 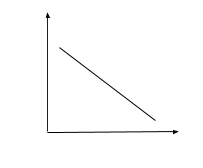 Ten (10) different diameters of the same wire would be appropriate; I would record the three (3) sets of results in 3 different tables similar to the one below:

Finally I would calculate the resistance by adding the three different resistance calculations and the dividing by 3:

I would lay out the average resistance results in a table similar to the one below: