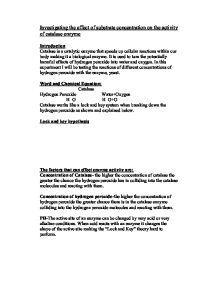 Investigating the effect of substrate concentration on the activity of catalase enzyme.

because if one has more time than another then there is a high chance that the oxygen gas would have more time to be released. * Finally, I will change the water in the plastic tub after every experiment as the heat caused by the reaction will heat up the water in the tub causing an intervention in the temperature of the test tube. Which in turn could speed up the reaction between the hydrogen peroxide and yeast, interfering with my results. To ensure my results are reliable I will test the same percentage of hydrogen peroxide three times then take an average from my results. As hydrogen peroxide is a powerful oxidising agent and can be potentially damaging to cells, I will wear safety glasses and work safely and sensibly throughout the experiment. After I have completed the experiment I will use my data to produce graphs to see if there is any correlations or patterns according to the amount of gas released and the percentage of hydrogen peroxide in my results. Prediction I predict that as the concentration of the substrate increases, the rate of reaction will speed up because the more particles there are the higher the chance of collision. When the substrate and catalase particles collide with each other they form enzyme substrate complexes this then breaks down the hydrogen peroxide into water and oxygen. So as the concentration increases more enzymes substrate complexes are formed but at a faster rate. ...read more.

As a result of this, I can prove why I repeated the tests for each of the concentrations, without doing so my results could be unreliable as they would show errors in my experimenting and not in the actual result of the reaction. Evaluation I think the quality of my results are fairly accurate but considerable changes should happen if I was to act upon this experiment again this is so that I can be sure my results are a hundred percent reliable. For instance, I should have checked the room temperature before each test so that there weren't any fluctuations and made sure the test tube with the hydrogen peroxide and yeast in was at the same temperature for each of the tests. I could also have done five tests instead of three to have made my results even more accurate then recorded them precisely up to the nearest millimetre cubed. I could also do some further work to add additional relevant evidence to this experiment. One way I thought of was to heat the test tubes the hydrogen peroxide and yeast are placed in to get an increased reaction. Another way would be change the concentrations of the hydrogen peroxide from going up in twenties to going up in fives to increase the accuracy of my results. Concluding this experiment I would say that concentration in a reaction is extremely important in what result is wanted or to be tested. ...read more.