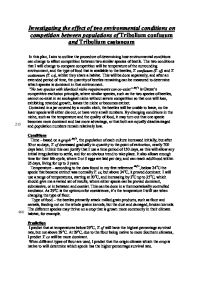 Investigating the effect of two environmental conditions on competition between populations of Tribolium confusum and Tribolium castaneum In this plan, I aim to outline the procedure of determining how environmental conditions can change to affect competition between two similar species of beetle. The two conditions that I will change to compare competition will be temperature of the surrounding environment, and the type of food that is available to the beetles, T. confusum (T. cf) and T. castaneum (T. cs), whilst they share a habitat. This will be done separately, and after an extended period of time, the quantity of beetles remaining can be measured to determine which species is dominant in that environment. "No two species with identical niche requirements can co-exist" Ref 1 is Gause's competitive exclusion principle, where similar species, such as the two species of beetles, cannot co-exist in an ecological niche without severe competition so that one will lose, exhibiting retarded growth, leaves the niche or becomes extinct. Contained in a jar covered by a muslin cloth, the beetles will be unable to leave, so the loser specie will either die out, or have very small numbers. ...read more.

Prediction I predict that at temperatures below 29oC, T. cf will have the highest percentage survival rate, but not above 29oC. At 29oC, due to the flour being native to more Southern climates, I predict T. cs will be more dominant. When different types of flour are used, I predict that the origin climate which the crop is native to will determine which specie has the higher percentage survival rate. Precision To ensure receiving the most accurate results as possible, I will aim to keep all other conditions as constant as possible. This includes volume of flour, number of starting beetles, time that the experiment runs for and, when not in question, the temperature and type of flour. Because the organisms are reproducing over a long period of time, controlling every aspect is impossible, so I will repeat each experiment twice, so that I may take an average result which will be more accurate. Furthermore, I will take my result as a percentage survival rate of the beetles, dividing the end quantity by the starting quantity, and multiplying by 100. I will count the beetles every 15 days to ensure a trend is being followed. ...read more.

Identifying the beetles will also be difficult as they are very similar in appearance, especially before reaching adult stage, and will be moving under the hand lens, so slight anomalous may occur. As with organisms, controlling every environmental factor is impossible, so it must be taken into consideration that unexpected mortality or reproduction may occur. Hazards and precautions People may be allergic to the beetles, particularly sufferers of asthma should take care when handling them. Average Percentage Survival (%) Time (Days) 15 Temperature oC Flour Type 1 2 3 T. cf T. cs T. cf T. cs T. cf T. cs 20 Corn 23 Corn 26 Corn 29 Corn Irish Wheat Chestnut Noodle Tapioca 32 Corn 35 Corn Table showing percentage survival of species every, including 2 repeats, for the first 15 days, using different temperatures and flours; must be continued up to and including 150 days. This can then be summed up in an average table, from which a graph can be plotted for the average percentage survival at different temperatures, as predicted below. A bar chart can show average percentage survival for different flours. Average percentage survival (%) Temperature oC Flour Type T. cf T. ...read more.