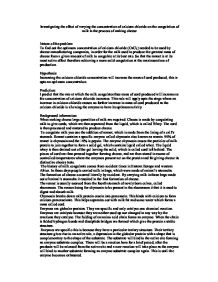 Investigating the effect of varying the concentration of calcium chloride on the coagulation of milk in the process of making cheese.

Investigating the effect of varying the concentration of calcium chloride on the coagulation of milk in the process of making cheese Nature of the problem: To find out the optimum concentration of calcium chloride (CaCl2) needed to be used by cheese manufacturing companies, in order for the milk used to produce the greatest mass of cheese from a given amount of milk to coagulate at its best rate. So that the rennet is at its most active effect therefore achieving a more solid coagulation at the maximum time of production. Hypothesis: Increasing the calcium chloride concentration will increase the mass of curd produced, this is upto an optimum concentration. Prediction: I predict that the rate at which the milk coagulates thus mass of curd produced will increase as the concentration of calcium chloride increases. This rule will apply upto the stage where an increase in calcium chloride causes no further increase in mass of curd produced as the calcium chloride is allowing the enzyme to have its optimum activity. Background information: When making cheese large quantities of milk are required. Cheese is made by coagulating milk to give curds, which are then separated from the liquid, which is called Whey. The curd is then processed and matured to produce cheese. To coagulate milk you use the addition of rennet, which is made from the lining of a calf's stomach. Rennet contains a specific enzyme called chymosin also known as rennin. 90% of rennet is chymosin and the 10% is pepsin. The enzyme chymosin causes the particles of milk protein to join together to form a solid gel, which contains liquid called whey. The liquid whey is then drained out of the gel leaving the solid, which is called curd left behind. The pieces of curd are then pressed together forming cheese, and are then stored in rooms of controlled temperatures where the enzymes present act on the protein and fat giving cheese its distinctive cheesy taste. ...read more.

The glass, which is broken, should be picked up using dustpan and placed in a bin designed for glass disposal (sharps bin). Gloves should be used when dealing with chemicals, and after use they should be disposed off in an appropriate manner. The inhalation of enzymes must be avoided, as it is an irritant. Any spillages of rennin or calcium chloride should be washed thoroughly with soap and water. If any rennin or calcium chloride were to be accidentally taken in, you would seek for medical attention immediately. Food or drink should not enter the lab. And under no circumstances be eaten or drunk in the laboratory. Generally when in a laboratory, there should be a correct manner of behaviour, and a certain level of maturity. Full fat cows milk is of low risk which means care should be taken when using the milk but it is not hazardous whereas when using calcium chloride an extreme amount of care should be taken as it is an irritant. It is irritating to the eyes, skin and respiratory system. To prevent any hazards occurring with calcium chloride and other solutions used in the investigation eye protection (goggles) and gloves should be worn. If there are any splashes eyes should be washed immediately using eye wash which are kept in bottles on the lab walls. Pilot study: A pilot study is a small-scale experiment designed to decide how to carry out the actual full-scale experiment you are going to undertake. By carrying out a pilot study you can test for the actual experiment, testing if the experiment works and if anything needs to be altered. This saves time and money, as a pilot study is only a small-scale study. The objective of me carrying out a pilot study was to show that the volume of milk, rennet and calcium chloride were all suitable and adapted to the full-scale experiments I was going to carry out. ...read more.

This would help decrease the variability in my results, as it would bring more accuracy and precision to my results. For a further experiment I could use more individualistic concentrations. By doing this I would bring more precision and also accuracy to my results. By having tested individualistic concentrations of calcium chloride I would be able to plot more points on my graph. This would be of great use to my analysis as I would be able to find a more detailed trend in my results and be able to spot any anomalous results I have not already. I would mainly investigate concentrations in between large gaps I have on my graph, for example there is a large difference in the average mass of curd produce for 0.01moldm-3 and 0.02moldm-3, therefor I would use a concentration of 0.015 which would give me a point on the graph showing what happens between the two points. Acknowledgements I would like to thank all the science department for all the support and guidance they gave me when I was carrying out my experiments. Firstly I would like to thank Miss Welfare. Miss Welfare made it possible for me to carry out all my experiments as she ordered all the chemicals and equipment I required for my experiments and made sure they were ready in the laboratory for me to use on the day I was carrying out my experiments. I would also like to thank Mrs Lassman and Mrs Chatterjee who made it possible for everyone to carry out their experiments by coming into college in her own time and offering guidance to anyone who was in need of it as well as supervising the students as the experiments were carried out. Contents Title Page Acknowledgements 1 Natuer of the problem 2 Hypothesis 2 Prediction 2 Background infomation 2 Variables 3 Apparatus 4 Method 4 Risk assessment 5 Piolt study Main Method ...read more.