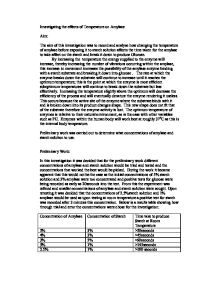 Investigating the effects of Temperature on Amylase.

Investigating the effects of Temperature on Amylase Aim: The aim of this investigation was to record and analyse how changing the temperature of amylase before exposing it to starch solution affects the time taken for the amylase to take affect on the starch and break it down to produce Glucose. By increasing the temperature the energy supplied to the enzyme will increase, thereby increasing the number of vibrations occurring within the amylase, this increase in movement increases the possibility of the amylase enzyme binding with a starch substrate and breaking it down into glucose . The rate at which the enzyme breaks down the substrate will continue to increase until it reaches the optimum temperature; this is the point at which the enzyme is most efficient suboptimum temperatures will continue to break down the substrate but less effectively. Increasing the temperature slightly above the optimum will decrease the efficiency of the process and will eventually denature the enzyme rendering it useless. This occurs because the active site of the enzyme where the substrate binds with it and is broken down into its product changes shape. This new shape does not fit that of the substrate therefore the enzyme activity is lost. The optimum temperature of enzymes is relative to their natural environment, as is the case with other variables such as PH. Enzymes within the human body will work best at roughly 370C as this is the internal body temperature. Preliminary work was carried out to determine what concentrations of amylase and starch solution to use. Preliminary Work: In this investigation it was decided that for the preliminary work different concentrations of amylase and starch solution would be tried and tested and the concentrations that worked the best would be picked. During the work it became apparent that this would not be the case as the initial concentrations of 5% starch solution and 3% amylase were too concentrated and positive tests for glucose were being recorded as early as 20seconds into the test. ...read more.

this along with using a larger range of temperatures then it would have been possible to note when the glucose concentration began to decrease instead of when there was no glucose. If I had time I could have carried out tests using colorimeters in my preliminary work and recorded known concentrations to test the ones obtained in the experiment against. * It is probable that in each test tube/measuring cylinder there was some remaining amylase or starch from previous tests and washing this out each time would have increased the accuracy and reliability of the experiment. * Certain stages of the experiment could have been computer controlled i.e. the timings and the concentrations and mixing; this would remove the imperfections associated with doing things like timing as soon as the amylase is dropped into the starch. The equipment used could have been improved if: * A volumetric or graduated pipette was used to measure out the amounts of amylase and starch to be used * The water baths that were used all were at the exact same temperature, it was impossible to ensure this I used a manual water bath using a large beaker filled with water and a Bunsen burner to save time instead of using the water baths with set temperature controllers on them. * As the experiment was carried out over a period of 2 weeks, at 10 different intervals it was very difficult to ensure that the same equipment was used every time this in turn will have hindered the reliability of the experiment. In conclusion the experiment was of reasonable accuracy as the results obtained are consistent and coherent and in accordance with scientific theory however there are clearly several ways that the validity of this experiment could have been improved To conclude the investigation it is clear that temperature does have an affect on amylase and I have found that the optimum temperature for amylase from my tests was 45 degrees and it denatured at 65 degrees Celsius. ...read more.