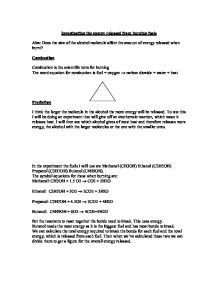 Investigating the energy released from burning fuels Aim: Does the size of the alcohol molecule affect the amount of energy released when burnt? Combustion Combustion is the scientific term for burning The word equation for combustion is fuel + oxygen ? carbon dioxide + water + heat Prediction I think the larger the molecule in the alcohol the more energy will be released. To test this I will be doing an experiment that will give off an exothermic reaction, which mean it releases heat. I will then see which alcohol gives of most heat and therefore releases more energy, the alcohol with the larger molecules or the one with the smaller ones. In the experiment the fuels I will use are Methanol (CH3OH) Ethanol (C2H5OH) Propanol (C3H7OH) Butanol (C4H9OH). The symbol equations for these when burning are: Methanol: CH3OH + 1.5 O2 ? CO2 + 2H2O Ethanol: C2H5OH + 3O2 ? 2CO2 + 3H2O Propanol: C3H7OH + 4.5O2 ? 3CO2 + 4H2O Butanol: C4H9OH + 6O2 ? 4CO2+5H2O For the reactants to react together the bonds need to break. This uses energy. Butanol needs the most energy as it is the biggest fuel and has most bonds to break. We can calculate the total energy required to break the bonds for each fuel and the total energy, which is released from each fuel. ...read more.

Pre-Test I am conducting a pre-test to find out the best way the main test should be conducted. In the pre-test we will be using the same fuel for every test. For the first test we timed the experiment for 2 minutes and used 50 ml of water. These were the results we got. Time Temperature 0 20 30 24 60 28 90 33 120 37 Diagram Method We set up the apparatus as shown above. We weighed the burner before we lit it. We made sure that the thermometer wasn't touching the sides of the cup. Then we lit the burner and placed it under the cup of water and set the stopwatch. We then checked the temperature of the water every 30 seconds for 5 minutes. We weighed the burner at the end of the experiment. Fair Test We made this experiment fair in a number of ways. First of all we conducted a pre-test to see which way we should do the main experiment. We didn't allow the thermometer to touch the sides of the cup so it was just measuring the heat of the water. We made sure that the cup was roughly the same height from the ground. ...read more.