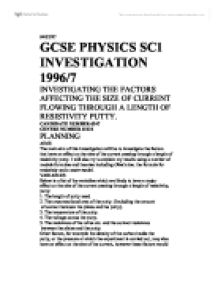 Investigating the factors affecting the size of current flowing through a length of resistivity putty.

AFFECTING THE SIZE OF CURRENT

FLOWING THROUGH A LENGTH OF

resistivity putty. I will also try to explain my results using a number of

models formulae and theories including Ohm's law, the formula for

resistivity and a water model.

effect on the size of the current passing through a length of resistivity,

1. The length of putty used.

2. The cross-sectional area of the putty. (Including the amount

3. The temperature of the putty.

4. The voltage across the putty.

5. The resistance of the wires etc. and the contact resistance

between the plates and the putty.

Other factors, for example the density of the carbon inside the

putty, or the pressure at which the experiment is carried out, may also

have an effect on the size of the current, however these factors would

The two factors which I have chosen to investigate are:

1) How the length of putty used affects the size of the current.

test. They are also factors which should give meaningful results which

can be used to make good conclusions.

have had a resistivity of about 4x10-2 Ω m. For this experiment I will refer

The apparatus was set up as shown in the diagram below:

The circuit was set up as shown on the previous page. The putty

wooden board over the top. Once the putty was nearing the correct shape,

putty could not be rolled out thinner than the required diameter. The putty

In each experiment the rheostat was adjusted so that the voltage

connected to the circuit. I tried to make sure that the connection between

1. The copper plates were cleaned with emery paper before

they were placed against the putty.

2. I inserted the plates at right angles to the putty and gently

good contact was made without changing the shape of the

3. The plates were inserted in the same way for each

experiment to ensure the results were fair.

changed the shunts on the ammeter. If the current was below 100mA I

100mA. If the current was larger, I used a 1A shunt. I designed the

experiments so that there was never a current of more than about 0.5A

some large experimental errors in my experiments. Below is a list of the

factors I consider to have been responsible for the largest errors:

1. Inaccurate measuring equipment such as ammeters.

2. Inaccurate use of measuring instruments such as rulers

which lead to inaccuracies in the results.

3. The fact that the resistance of the pieces of putty I was using

seemed to change due to perhaps uneven distribution of the

carbon inside the putty or changes in the temperature of the

putty. The changes could be due to large currents flowing

through the putty or the putty being heated up by my

hands, friction when it was being rolled out or changes in

the temperature of the room.

4. Differences in the uniformity of the putty.

This experiment was limited by a number of factors. Firstly it was

limited by the amount of time available. Although we, as a class, had

accurate conclusions, we did not have enough time to carry out more

experiments on pieces of putty with particularly large cross-sectional

areas or long lengths of putty. This means that range of results is limited.

been able to draw accurate conclusions.

A summary of my final conclusions for this investigation is as

1. The length of a piece of resistivity putty is inversely proportional to

the size of the current flowing through it.

2. The cross-sectional area of a length of resistivity putty is directly

proportional to the size of the current.

current flowing through it. However, if I was to continue the investigation