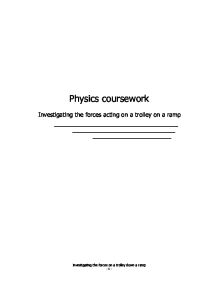 Investigating the forces acting on a trolley on a ramp

Investigating the forces acting on a trolley on a ramp

The aim of the investigation was to investigate the forces acting on a trolley as it rolled down a ramp, and also to investigate the factors which may contribute to the results. To do this, a trolley and a ramp set at a variety of angles of incline were used, and then, using a light gate, the speed at which the trolley was moving when it passed through the light gate was calculated. The variables were the starting distance of the trolley in relation to the light gate and the angle of the ramp.

Firstly, the equipment was set up as in fig. 1. The trolley was then run down the ramp with a piece of card attached to the side. This card was of a known length and could hence be used to calculate the velocity at which the trolley was moving. While the light gate did actually calculate the velocity, it only gave the answer to 2 decimal places, whereas it gave the time to 2 decimal places. Furthermore, the light gate calculated the velocity with the assumption that the card was exactly 100mm, whereas when the card was actually measured, this was a value closer to 102mm (±0.5mm). Next, after the trolley had passed through the light gate, the information from that ‘run’ appeared on the LCD of the light gate, and this was noted down.  Three readings were taken for each distance from the light gate so that an appropriate average could be taken. These were taken across a range of seven distances between 250mm and 1750mm inclusive.

A further random error was introduced into the results by the accuracy of the 5mm LEDs on which the light gates work. Between the ‘gate’ of the light gate, there are two IR LEDs, which maintain a beam between them. Simply put, when the beam is broken, this sends a signal to the main processor, which starts the timing. The signal from the LED which is detecting the IR radiation sends its signal when the intensity of IR reaching it reaches a certain point. Without doing a complicated experiment, there is no way to determine at what level or intensity of IR the light gate will start or stop timing. Furthermore, because the experiment was done in a room which was lit by natural light (in this case, the main source of IR), the background intensity of IR will have fluctuated from each result. This means that for each time the card passed through the light gate, timing could have started at a different point. While this difference would be minute, the value is used to calculate v2, and hence any error which the calculation of v incorporates is squared, and made more significant. To further improve accuracy of the results, it would be necessary to do the experiment again in a place that suffers from less IR light pollution.

If the experiment was to be repeated, the following things would be changed. All of these aim to further reduce error which could be only be accounted for in the write up, rather than in experimental practice.

If most of these improvements were made, the expected result would be that the values of g would become more precise, with less uncertainty associated to them.

Investigating the forces on a trolley down a ramp

The authorÃ¢â‚¬â„¢s response to the question is very good Ã¢â‚¬â€œ they have explained the experiment clearly, discussed their results, and evaluated the uncertainties. They have calculated a range of possible values for the acceleration due to gravity on the trolley, ...

The authorÃ¢â‚¬â„¢s response to the question is very good Ã¢â‚¬â€œ they have explained the experiment clearly, discussed their results, and evaluated the uncertainties. They have calculated a range of possible values for the acceleration due to gravity on the trolley, which is close to the true value of g. They have shown an excellent understanding of the physics and a good mathematical ability. They have provided a detailed evaluation of the experiment and a conclusion, in which they summarised their experiment. However, I would have worked out an average calculated value for the acceleration due to gravity and stated this in the conclusion, mentioning how close it is to the accepted value of 9.81 as this clearly shows you have found an answer to the original question.

The author has carried out the experiment well and produced some good results. They have then used graphs and maths to calculate the value of the acceleration due to gravity on the trolley. S/he has evaluated all the uncertainties in their measurements, and suggested improvements to the experiment. However, they have not carried out the improved experiment, which may be necessary for some exam boards to gain full marks as you can compare results and discuss whether the improvements actually worked. They have shown their workings throughout, explaining in detail the thought behind all of the derived formulae, which is essential to gain good marks (it shows you actually understand what youÃ¢â‚¬â„¢re doing rather than copying some formulae out of a textbook).

Their spelling and grammar is very good throughout. The report is very clearly presented, with subtitles and a contents page Ã¢â‚¬â€œ this makes it much easier both for a teacher to mark it and someone to read. However, usually a report should be presented fairly chronologically, to make it clear to the reader the steps and thought processes involved Ã¢â‚¬â€œ but in places the author has discussed things a bit early, for example Ã¢â‚¬Å“because the angles that were worked with were all less than 12Ã‹Å¡, it is especially noticeable in the results and is be the single most prominent source of systematic error.Ã¢â‚¬Â was in the theory section (near the beginning) when I would not have mentioned it until the sources of error section. However, this is a fairly minor issue, and probably unlikely to have an effect on the marks. They have used diagrams and graphs throughout, which helps to illustrate their method and workings-out, although we were advised to include a Ã¢â‚¬Ëœworking graphÃ¢â‚¬â„¢ with gradient lines drawn on (in pencil) in order to gain more marks.