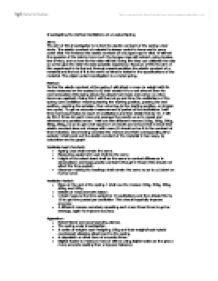 Investigating the Vertical Oscillations of a Loaded Spring.

Investigating the Vertical Oscillations of a Loaded Spring

To find the elastic constant of the spring I will attach a mass (a weight with its mass measured on the scales) to it, then stretch it to a set amount from its normal location (this being where the attachment hook rests when no other forces are applied). Doing this I will then let go and time the oscillations of the spring (one oscillation meaning leaving the starting position, passing the rest position, reaching the aphelion, then returning to the starting position, or simpler one cycle). To get an accurate measurement of period of the oscillations I will time how long it takes to reach 10 oscillations and then divide that by 10.

Then this is called ‘Equilibrium’

First of all by looking at the diagram, the resultant force is equal to the downward force and the mass and the spring remain unmoved due to Newton’s first law, and we call this equilibrium, where the 2 forces are equal. Now, when the spring is stretched by an external force, the weight moves down from its balanced position. There is now a displacement of the weight from its balanced position.  it is greater than the downward force (gravity)/the upward force (pull of springs).  Therefore, the spring and the weight accelerate upwards/downwards and the oscillation begins. The acceleration can be calculated with Newton’s Second Law

But in my case, the acceleration can be defined as this: If we used a larger mass, the same forces would be seen, but lower down.

The total amount of elastic potential energy and kinetic energy is constant; therefore there is always the transformation between the two forms of energy when the spring is oscillating. Therefore it has the basic and universal characteristics of all waves, which involves the transfer of energy.

Points to note for fair testing:

There are a few things that I will need to carry out in this experiment to keep it as fair as possible to get the most accurate results.

A large error was avoided by confirming the graph was plotted correctly. Without this correction I would have had an error of roughly 340% (Plotting the axis the wrong way round gives the elastic constant as roughly 75 and (75/22)*100 = 340).

Having caught the potential error of mis-stated masses I’m quite confident of the experiments accuracy.

To improve this investigation I could rig up a more accurate timing device that used the oscillating load to start and stop the timer rather than just using a human observer. This would cut down on human error.

As an extension to this investigation I would study many different springs to confirm that the method applies to all materials, and was not just a chance fluke. I could also study whether heat and other environmental constants affect the elastic constant of a material.