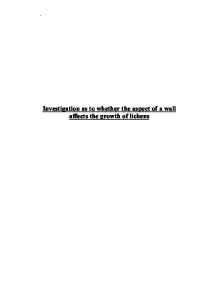 Investigation as to whether the aspect of a wall affects the growth of lichens Contents 1. Plan 2. Abstract 3. Introduction 4. Method 5. Results 6. Analysis of Results 7. Evalutation 8. Improvements & Conclusion 9. Bibliography Investigation of the effect of aspect on the growth of lichens on a wall Plan Aim Investigate the effect of aspect on the growth of lichens on a wall. Null Hypothesis The aspect has no effect on lichen growth on walls. Alternative Hypothesis The aspect does have an effect on lichen growth on walls. Alternative Directional Hypothesis There will be more lichen growth on the south side of the wall as this gets more sunlight due to the suns orbit as it rises in the east and setting in the west via the south. Independent Variable 1. Light intensity - this can be controlled by only minimally by carrying out the experiment quickly as over the course of the day light intensity changes, and also by keeping the photometer out of light directly as its value will then be too high as lichens are not directly in sunlight all day due to shading by objects and clouds. 2. Aspect of wall on upon which lichens are growing. 3. Quadrat positioning on the wall. Dependant Variable Lichen distribution and growth on the wall. Apparatus 1. Compass - this is needed to know the aspect of the wall. 2. Gridded Quadrat - this is needed for estimating lichen distribution across the wall. 3. Photometer - this is needed to investigate light intensity on selected parts of the wall over which the quadrats are laid. 4. Data Sheet and Pencil - this is needed to record your raw data. 5. 1 metre ruler - this is needed to measure the height at which the quadrats are placed and also the intervals between quadrat settings. Control 1. To control light intensity, the photometer should never be directly in the path of light as this will produce extremely high results which are disproportionate to the actual light intensities the lichens receive over the period of the day. ...read more.

The photometer has a number of settings it was placed on the highest (x100), and placed in the as near the centre of the quadrat as possible without being in the direct rays of the sun. The value, measured in lux, was then viewed and recorded in the tabulated sheet. Care was taken to prevent the photometer from being exposed to direct sun rays as this produces inaccurate values as the lichens are largely not exposed directly to sunrays due to such things as clouds blocking the sunrays for example. This procedure was then. Using the ruler, measuring from the edge of the quadrat and making sure that the ruler is horizontal by aligning it with bricks, a 50cm interval was then measured. Once this was done, the lower left hand side of the quadrat was then placed in this position, again at a height of 1 metre above ground level and checking with the 1 metre ruler. Again the light intensity and also number of squares laid over lichens is measured/counted and recorded on the tabular sheet. This procedure was repeated until 10 separate results were obtained. However due to obstruction by plants and bushes measurements further down the wall could not be obtained. Therefore this same procedure of attaining and recording results is repeated in the opposite direction at a height of 0.5 metres until 20 readings in total have been obtained. This exact same procedure is then repeated for the north aspect of the wall. Results No. of squares, of 9 over lichens on Southern Aspect Photometer Reading (x100 lux) 8 5 9 20 7 60 5 82 8 20 1 21 4 12 8 3 8 2 9 1 6 32 8 4 6 22 5 72 5 37 4 22 3 14 3 11 6 8 1 16 No. of squares, of 9 over lichens on Northern Aspect Photometer Reading (x100 lux) ...read more.

The quadrat that was being used was made of wire and the squares within the quadrat were not completely straight or exactly the same size as all the other squares. Therefore this poses another uncertainty. A quadrat made of completely straight edges should be used for more accurate results. Also the range of heights at which quadrats were placed should be increased to gain a wider perspective of the growth of lichens on the wall and also the frequency of readings taken should be increased i.e. the interval space between each quadrat should be decreased. The experiment was however conducted in a reasonable manner. Care was taken to prevent any accidents from occurring. Care was taken to ensure that quadrat settings were not biased and that many readings were taken to find good results. The overhanging bush could not have been avoided and this problem was specific to the particular wall one had to work with rather than any technique used. The photometer was kept out of direct sunlight as far as possible and all results were recorded quickly on paper to make sure nothing was forgotten later on. Improvements 1. Increase the range and frequency of measurements. 2. Repeat the experiment a number of times within the week to find an average conclusion as to the effects of aspect on lichen growth and also over the year to see how this may change with seasons. 3. Use smoother, straighter quadrats and ruler. 4. Take an average of many photometer readings for each quadrat placing. 5. Measure the effect of aspect on lichen growth on many different walls. 6. Determine and compare what species occur more prominently on each aspect of the wall and factor this into your conclusion. Conclusion The null hypothesis is correct as stated by the Man Whitney U test. However this cannot be fully accepted due to the number of flaws within the experiment as mentioned in the evaluation. ...read more.