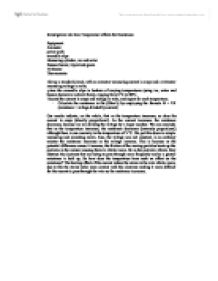 Investigation into how Temperature affectsthe Resistance.

Investigation into how Temperature affects the Resistance. Equipment: Ammeter power pack crocodile clips Measuring cylinder, ice and water Bunsen burner, tripod and gauze Voltmeter Thermometer -Set up a standard circuit, with an ammeter measuring current in amps and a voltmeter measuring voltage in volts. -place the crocodile clips in beakers of varying temperatures (using ice, water and bunsen burners to achieve them), ranging from 0 �C to 80�C. ...read more.

So as the particles vibrate, they obstruct the electrons that are trying to pass through more frequently and so a greater resistance is built up. So how does the temperature have such an effect on the resistance? The heating effect of the current makes the atoms in the wire vibrate more, due to this the atoms make more contact with the electrons making it more difficult for the current to pass through the wire so the resistance increases. ...read more.