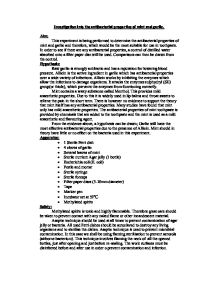 This experiment is being performed to determine the antibacterial properties of mint and garlic and therefore, which would be the most suitable for use in toothpaste. In order to see if there are any antibacterial properties, a control of distilled water absorbed onto a filter paper disc will be used. Comparisons can then be drawn from the control.

Raw garlic is strongly antibiotic and has a reputation for lowering blood pressure. Allicin is the active ingredient in garlic which has antibacterial properties over a wide variety of infections. Allicin works by inhibiting the enzymes which allow the infections to damage organisms. It attacks the enzymes sulphydryl (SH) group(or thiols), which prevents the enzymes from functioning correctly.

From the evidence above, a hypothesis can be drawn; Garlic will have the most effective antibacterial properties due to the presence of Allicin. Mint should in theory have little or no effect on the bacteria used in this experiment.

Methylated spirits is toxic and highly flammable. Therefore great care should be taken to prevent contact with any naked flame or other incandescent material.

Aseptic technique should be used at all times to prevent contamination of agar jelly or bacteria. All used Petri dishes should be autoclaved to destroy any living organisms and to sterilise the dishes. Aseptic technique is used to prevent microbial contamination. In this case we shall be using flaming sterilisation to prevent aerosols (airborne bacterium). This technique involves flaming the neck of  all the opened bottles, just after opening and just before re-sealing. The work surfaces must be disinfected before and after use in order o prevent contamination and infection.

When taping the lid of the Petri dish shut, do not seal all of the way around the dish. Doing so might stimulate the growth of anaerobically respiring bacteria which can be harmful. Use 4 short strips to seal the dish in 4 places.

This is the variable which we shall be measuring. In this case it is the diameter of the zone of inhibition and therefore the effectiveness of the plant extract in question; Mint or Garlic.

These are the variables which we will be changing during the experiment. It is advisable to change only one variable at a time to maintain accuracy. In this experiment the independent variable is the plant matter with the antibacterial properties; Mint and Garlic.

These are the variables that will be kept at constant for all experiments. There are several in this experiment:

This experiment will only be accurate and therefore valid if aseptic techniques are used. This means flaming all bottles after unsealing and before sealing, autoclaving all materials before use and disinfecting all work surfaces before use.

When opening the Petri dish, use only a small opening and open near toa Bunsen burner. The purpose of the Bunsen burner is to carry away aerosols and to keep contaminations airborne, away from the experiment.        If contamination is believed to have occurred, the experiment should be restarted to eliminate the risk of false results.

From the results shown on the table and graph on previous pages, the mint had no anti-bacterial effect whatsoever. The garlic on the other hand had a more profound effect, both of which support my hypothesis; “Garlic will have the most effective antibacterial properties due to the presence of Allicin. Mint should in theory have little or no effect on the bacteria used in this experiment.”

The average zone of inhibition in mm for mint was 0, for garlic it was 17.3mm.  this is conclusive evidence that garlic contains a chemical, or mixture of chemicals which posses antibacterial properties.

Recent scientific studies also back up my evidence for garlic and the role of Allicin, “In the studies, the scientists revealed and characterized a molecular mechanism by which Allicin blocks certain groups of enzymes. Allicin, created when garlic cloves are crushed, protects the plant from soil parasites and fungi and is also responsible for garlic's pungent smell.

There was a light degree of variation between the results, this may have been caused by contamination by a more resilient bacteria or, more likely, due to the concentration of antibacterial matter on the filter paper discs. Contamination due to another bacterium could be identified by any colonies forming on the agar jelly as the technique used here would create a “lawn” of bacteria spread evenly over the agar jelly. In order to overcome this in future experiments, all discs should be of equal size, equal depth in the paste and in the paste for an equal length of time, this is all that could be done to overcome this factor as it is very difficult to regulate.

Another factor that may have affected the results is contamination. If a more resilient bacterium is present in the mixture, the zone of inhibition would have been reduced. To overcome this in future experiments, more stringent aseptic techniques would need o be implemented to protect against contamination, or at least reduce it.

From the result, it is evident that mint is totally ineffective against infection and therefore useless in antibacterial toothpaste. The only service it could provide is the slight anaesthetic properties and its taste. Garlic on the other hand would be very effective in antibacterial toothpaste if a little pungent smelling. Allicin would be effective in toothpaste and the overpowering smell of garlic should not be present.