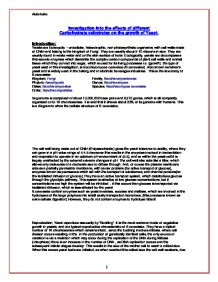 Investigation into the effects of different

Investigation into the effects of different Carbohydrate substrates on the growth of Yeast. Introduction: Yeasts are Eukaryotic - unicellular, heterotrophic, non-photosynthetic organisms, with cell walls made of Chitin and belong to the kingdom of Fungi. They are usually about 5-10 microns in size. They are usually found in waste water and on the skin surface of fruits .Ecologically, yeasts are decomposers that secrete enzymes which dismantle the complex carbon compounds of plant cell walls and animal tissue which they convert into sugar, which is used for its living processes i.e. (growth) .the type of yeast used in this investigation, is Saccharomyces cerevisiae (S.cerevisiae) .Also known as baker's yeast and is widely used in the baking and in alcoholic beverages industries. This is the taxonomy of S.cerevisiae: Kingdom; Fungi Family; Saccharomycetaceae Phylum; Ascomycota Genus; Saccharomyces Class; Saccharomycestes Species; Saccharomyces cerevisiae Order; Saccharomycetates Its genome is comprised of about 13,000,000 base pairs and 6,275 genes, which is all compactly organised on to 16 chromosomes. It is said that it shares about 23% of its genome with humans. This is a diagram to show the cellular structure of S.cerevisiae; The cell wall being made out of Chitin (Polysaccharide) gives the yeast tolerance to acidity, where they can grow in a pH value range of 4-4.5.moreover this results in the enzymes involved in fermentation and respiration to operate in an optimum pH environment of (5.5), and so within the yeast cell it is largely unaffected by the external extreme changes in pH. The cell wall also acts like a filter, which allows only molecules of a moderate size to diffuse through. And, of course the plasma membrane acts as a partially permeable membrane, with carrier proteins (for active transport of glucose), enzymes known as permeases which aid with the transport of substances, and channel proteins(for the facilitated diffusion of glucose).They have an active transport system, which metabolizes glucose through the glycolytic pathway, This system is effective at low glucose concentrations, but if concentrations are high the system ...read more.

If this was not standardised then the yeast growth in the conditions stirred the most (fully dissolved) would be higher, making it biased. 6. The conditions will be fixed to be sterile and at anaerobic respiration; sterilising the yeast environment, is very important, especially as its growth is studied, if a bacterial contamination occurred, then the bacteria will compete for the resources, affecting both the growth rate and the final population size, and so acting as a major confounding variable. This would be done, by placing a rubber lid on the test tubes. Doing so will also control another confounding variable, which is the fact that yeasts are facultive anaerobes, and so placing a lid, limits the oxygen supply, and so the respiration would be standardised at anaerobic respiration. Different respiration (anaerobic/aerobic) produce different amounts of ATP energy and in turn would have different effects on the rate of yeast growth. Aerobic respiration will provide more ATP energy for growth and so the yeast may grow faster, but if was left aerobic then there would be a great and quite discrete risk of bacterial contamination. 7. The time the yeast culture (yeast and carbohydrate) remains in the water bath; will be controlled to be 1hour and 45 minutes. since yeast cells would require time to adapt to the conditions before beginning to divide, (characteristic of the lag phase).As the experiment has to be done in 1 day, 1hr 45min is the longest possible time for each condition (including the control test).If the culture remains in the water bath for less time, then this would not be enough to observe all the growth stages of the yeast population and so this would prevent all the phases to be plotted on the growth graph , resulting in an inaccurate graph. 8. Time intervals between removing and counting a sample; is going to be 15minutes, as it is a reasonable time to observe a difference in the growth of the yeast population. ...read more.

of the different carbohydrate substrates (glucose, Maltose and Starch), a growth graph for each will be drawn; Lag Log Stationary Death The phases refer to the following; Lag refers to a time where the yeast cells are not dividing; there is only an increase in cell mass, but not in cell number. This occurs as the yeast are still adapting to their environment. Log; refers to a period where there's an exponential growth, the population can increase exponentially as there are no limiting factors. Stationary refers to; where the population remains the same as the number of new cells formed is equal to the number of cells dying. Limiting factors, such as nutrient supply, have started to influence further increase in population size. The yeast also produces changes in its environment, its metabolic products, such as ethanol may make it toxic and so unsuitable for further growth. Death; the individuals are unable to compete successfully, so they die and undergo autolysis. This is due to all the energy sources running out. The statistical test which I will be using to accept/reject my null hypothesis; Is the Chi-squared test; The degree of freedom (df); Total so it will be the number of carbohydrates used-1= Number Of categories -- 1 3-1= 2 The degree of freedom is 2 Using the table of probabilities with the (df) of 2 and the standard 0.05 level of probability. the tabulated value is 5.991,If the numbers derived from the chi-square calculations was less than the 5.991 number then at a 95% of confidence , it could be stated that the events( the growth of the yeast cells under each condition) was only due to chance alone. In this case the null hypothesis will be accepted. And, if the number was higher, then the events that have taken place are not due to chance alone, and so highlights the significance of the cause and effect. In this case the null hypothesis will be rejected. ...read more.